Paradise In The Pines 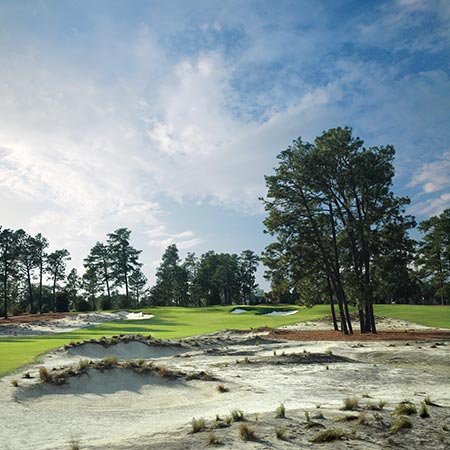 Last spring Ben Crenshaw was discussing the renovations to Pinehurst No. 2 with Les Fleisher on  Fleisher’s local “Tee Time” radio show here. Also in the studio was John Derr, the nonagenarian Pinehurst resident and sportscaster who covered 62 Masters, starting in 1935. Fleisher refers to Derr as “the last living link to golf of the Bobby Jones era.”

Crenshaw was discussing architect Donald Ross’ 1930s decision to transition from sand greens to grass. At that point, Derr piped in. Fleisher recalls Derr, now 95, saying, “Ben, let me explain exactly how that happened. I was here in 1934 when Mr. Ross returned to Pinehurst and said to Mr. (Leonard) Tufts, ‘I have seen the future of golf in Pinehurst, and it’s not sand greens. We’ve got to convert to grass greens.’ ”

Derr said he reluctantly agreed to tour Pinehurst No. 2 with Ross, who explained the changes he planned to make. Crenshaw, Fleisher said, sat there wide-eyed at Derr’s recollection.

“He was amazed at the first-person history,” Fleisher said.

Golf resorts can build great courses and lovely clubhouses. They can host important tournaments, even major championships. But developing a history and culture of golf comes only with time.

The people at Pinehurst like to think of their quaint Sandhills haven as America’s home of golf. There’s validation for that. Tom Pashley, executive vice president of Pinehurst Resort & Country Club, noted that employees’ business cards include a quote attributed to the St. Andrews Links Trust, keepers of the  original Home of Golf. It reads: “Of all the golf centers in the world, Pinehurst is the only one that comes close to sharing the ideals and aspirations of St. Andrews.”

How did a failed rehab facility for tuberculosis patients become America’s home of golf?

James Walker Tufts, a Massachusetts businessman, made his fortune selling soda fountains and “was committed to the idea that men of wealth had a responsibility to use their wealth for good purposes,” wrote Richard J. Moss in “Eden in the Pines,” a history of Pinehurst.

In 1895, Moss reported, Tufts bought 5,980 acres of Sandhills land for $7,400, and alerted Northern physicians that he was building a New England-style village and resort “to benefit invalids.” Tufts had a personal stake, having long battled various illnesses. But the highly contagious nature of tuberculosis made the venture untenable.

In fall 1897, according to Moss, “a number of guests began playing golf in the pasture devoted to the dairy herd.” So Tufts quickly built a nine-hole course.

“That was its saving grace. Golf and Pinehurst became intertwined right then and there,” said Richard Mandell, a golf architect, Pinehurst resident and author of the just-updated book “The Legendary Evolution of Pinehurst, Home of American Golf.”

By 1899, Ross had arrived from Scotland to head Pinehurst’s golf program and, of course, design its courses. Affluent Northerners soon began flocking to the Sandhills, often for extended stays as they made their way south for the winter.