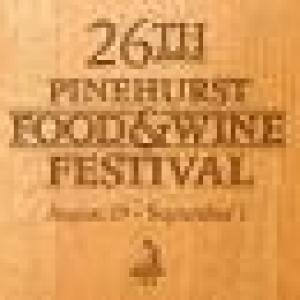 The festival is scheduled Aug. 29 through Sept. 1, and overnight packages begin at $295 per person and include two full days of activities. Tickets also can be purchased for individual seminars at www.ShopPinehurst.com beginning Aug. 1.

The Master of Ceremonies for the Food & Wine Festival is Luis Torres, who has represented a worldwide portfolio of prestige wines and currently directs the Academy of Wine’s Central and East Coast education programs.

Van Aken is known as the “founding father of New World Cuisine,” a celebration of Latin, Caribbean, Asian, African and American flavors, and is known internationally for introducing the concept of “Fusion” to the culinary world. He is Chef and Founder of “NORMAN’S at the Ritz-Carlton Grande Lakes in Orlando, Fla., which was nominated as a finalist for the James Beard Foundation’s “Best Restaurant in America.”

Saturday kicks off with a Culinary Demo and Luncheon featuring guest chefs, followed by seminars throughout the day and culminating in Van Aken’s featured dinner. “Sunset on Key West” will feature modern Caribbean-inspired courses paired with premier wines, and live entertainment from the widely celebrated Alternate Take.

Sunday’s highlight is new to the program, a Brewmaster’s Brunch that features some of the Carolinas’ best craft breweries in a beer garden setting. It will be followed by an “Iron Chef Competition,” which features Steve Queen and Glen Benskin competing to create three courses in 60 minutes all around a surprise key ingredient. The festival concludes the annual “Culinary Showcase” featuring top chefs from the Sandhills competing for the “Culinary Cup.”