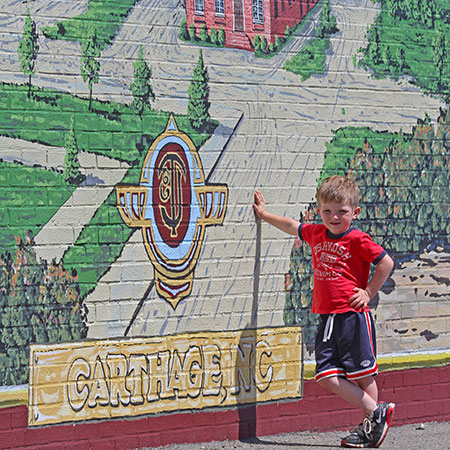 In an effort to revitalize the downtown area of Carthage, NC and create an attraction for tourists, the Carthage Mural Committee (a subcommittee of the Carthage Century Committee) has planned upwards of 20 murals to be painted on the sides of specially-selected buildings.  The first to be unveiled this month was created by Scott Nurkin, who lives in Chapel Hill. Scott has completed more than 100 murals in his career and is a graduate of UNC-Chapel Hill with a degree in fine arts.  Nurkin also studied at the Lorenzo di Medici School of Art in Florence, Italy.

The subject of the mural is the Tyson and Jones Buggy Company. Tyson and Jones ran a very successful buggy manufacturing company in Carthage (1850 – 1929) until the advent of the automobile eclipsed the demand for horse and carriage transportation. The Mural Committee project appealed to Nurkin as he studied more about the Tyson and Jones Buggy Company and its impact on the area.  Incorporated into the mural are hidden objects that will encourage viewers to spend some time to find them and learn more about Carthage history.

The idea for the murals came from local businessman Tommy Phillips, owner of Phillips Ford in Carthage, who discovered a similar idea while on a vacation trip near Sequoia National park in California.  About 30 murals were painted on the walls of downtown businesses in Exeter, CA and upon further investigation, Phillips learned that the murals created a draw for visitors to the town.  That inspired the notion of doing a similar project in conjunction with the Carthage Century Committee – something that would stimulate business in the downtown area.  The murals are designed to create an attraction for people to enjoy the art, visit the Carthage museum, and explore the shops and cafes near the town square.

The public is welcome and encouraged to visit the mural following its dedication on September 18, 2014 at 5:00 p.m.  The location is 104 McReynolds Street in Carthage.  For additional information, go to carthagemurals@gmail.com or www.townofcarthage.org