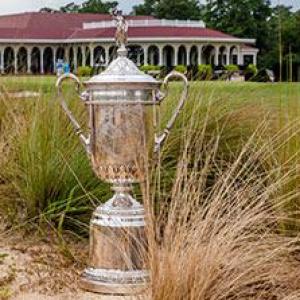 Pinehurst Resort & Country Club’s famed Course No. 2, in the Village of Pinehurst, N.C., has been selected by the United States Golf Association (USGA) as the site of the 2024 U.S. Open Championship. The dates of the championship are June 13-16. 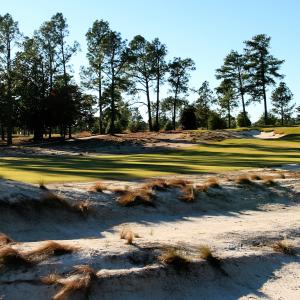 Bill Coore’s history in Pinehurst dates back to the 1960s, when he and boyhood friends from Davidson County often played 36 or 54 holes on summer days on No. 2.

Ben Crenshaw first visited Pinehurst in 1973, when he finished second in the World Open in his second event as PGA Tour member.

Their experiences then and since playing and studying Donald Ross’s tour de force have been bedrock influences in their golf design partnership, which dates to 1985. Since then they have designed more than two dozen golf courses worldwide, and in 2010–2011 they returned to Pinehurst to supervise the restoration of No. 2 from an emerald green swath of Bermuda grass back to the wide fairways and rugged look of hardpan sand and wire grass bordering the fairways.

“You have to go to Dornoch and to the old country to understand the appeal this ground had for Mr. Ross,” Crenshaw says. “You set your feet on links turf for the first time and you say, ‘My gosh, this is bone dry, this is different.’ The only water on those golf courses is what falls from the sky. The ball takes off and you just say, ‘Wow.’ The turf conditions there are very different. There are only a few spots where you can emulate Dornoch, and this is one of them.”

Coore made frequent references during his monthly visits to Pinehurst that the course was too pretty and too much defined by smooth, straight lines—like those surrounding bunkers and fairways.

“You look at all the golf magazines today, the courses they are featuring have this very natural, evolved look to them,” Coore says. “None of them portray the sense of the perfectly manicured look. Those are not the ones coming to the forefront. Bandon Dunes is in every magazine you pick up. Well, Pinehurst has been that since its inception. It was the leader in the beginning of very natural golf courses. It was one of the most natural-looking golf courses in the entire country.”

A key element of the restoration was the removal of some 32 acres of Bermuda rough and the reinstallation of hardpan sand and the planting of more than 100,000 wiregrass plants.

Coore remembered watching a U.S. Open qualifying tournament on No. 2 in the 1960s when Phil Rodgers cleanly picked a long iron shot off the hardpan and landed it on the green.

“The sound the club made hitting that sand was different from anything I had ever heard,” Coore says. “It was so interesting to me. I remember standing there and thinking, ‘This is infinitely more interesting than if he’d been in grass three inches thick.’ It’s a vivid memory.”