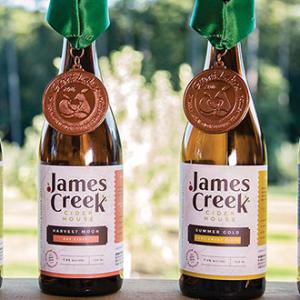 If you’re going to grow a business from the ground up, you might as well get a good buzz out of it. When Dr. David Thornton and his wife, Ann Marie, turned some of the same varieties of Southern heirloom apples George Washington and Thomas Jefferson had at Mount Vernon and Monticello into hard ciders of their own creation, the experiment blossomed into a cottage industry that could make your head whirl like Auntie Em’s house.

Crates of ripe Grimes Goldens, a fruit with roots dating back to 1790 and Johnny Appleseed, sit under the open-air shelter beside the cider house that, in a previous life, had been the Ferguson farm produce and ice cream stand on Old U.S. 1. The Thorntons’ F350 Super Duty truck is parked nearby, the door wide open so they can hear Nickel Creek on the sound system. Assisted by Erin Knight, who studied agriculture at the University of Vermont, they slice the apples by hand, carving out the bad spots. They dip them in a tub filled with water and a soupçon of bleach to discourage any natural yeasts, then rinse them off with a hose and feed them rapid fire down the metal throat of a crusher as if they were tossing rocks into a wishing well. Cut. Dip. Rinse. Grind. Repeat. The bluegrass mandolin is drowned out by the heavy metal symphony of grinding. Tiny shards of apple fly about like sweet, sticky shrapnel as a 5-gallon bucket fills with mashed pulp. They pour bucket after bucket into a cylindrical silver hydraulic press that, like a vertical colander, squeezes out the juice.

“This will be at least a two shirt-crushing,” says Dave. The old ice cream stand, now a constant 60 degrees, is the lab where they test pH, measure sulfites and add the yeast of their choice, maybe English cider or white wine. “Dave is in charge of microbial control,” says Ann Marie of their “picobrewery,” as she laughingly calls it. The pasteurizing is done in a tank behind the building. The old produce stand fronting the orchards the Thorntons now own is where they put the labels on the bottles with a hand crank machine, 10 in a minute, 1,200 on a weekend on the way to bottling a couple thousand gallons for the season. “I really am the chief cook and bottle washer,” says Ann Marie.

It’s the first season the Thorntons have been able to sell their cider commercially. Previously, they stayed under the legal limit and confined themselves to lighting up local happenings like Stoneybrook or the foxhunt and hanging out a shingle or two at the odd farmers market. Now, they’ll be producing two brands of hard cider, James Creek Cider House, made strictly from their own apples, and Stargazer, which will be a more adventurous version of the hard ciders familiar to most consumers’ taste buds.

“Our James Creek will be a very wine-like cider, refined, dry and relatively higher in alcohol content, about 8 or 8 1/2 percent,” says Ann Marie. “Stargazer is a little bit more on the craft beer, inventive side.” It’s where the Thorntons can get their freak on, blending in a hint of peach, blackberry, ginger, pretty much whatever they feel like. “For Stargazer we press our apples, we press apples from other growers, and we also bought juice. The Stargazer is themed with constellations. Prowling Peach is Leo. He’s a summer constellation. A lot of great apples ripen in October when Orion is high in the sky, so it will be Orion the Mighty Hunter. We might do a blend with persimmon for winter. Stinger for Scorpio. Something like that. I think we’ll have blueberry in the spring.”

Two of their ciders have won prizes in the Great Lakes International Cider and Perry Competition. (Yes, there are cider conventions.) Last year they attended CiderCON in Portland, Oregon. “Physician conferences look pretty bleak compared to cider conferences,” says Dave. “I used to think doctors partied. These guys are having fun.”

The Thorntons aren’t trying to become the Angry Orchard of the East. “If we come out with a good quality product that gets people engaged and just keep it local, then we will have met our goals,” says Dave. “We love this land. We love the countryside. Having something we can use the land for and creating something new is part of the challenge.”