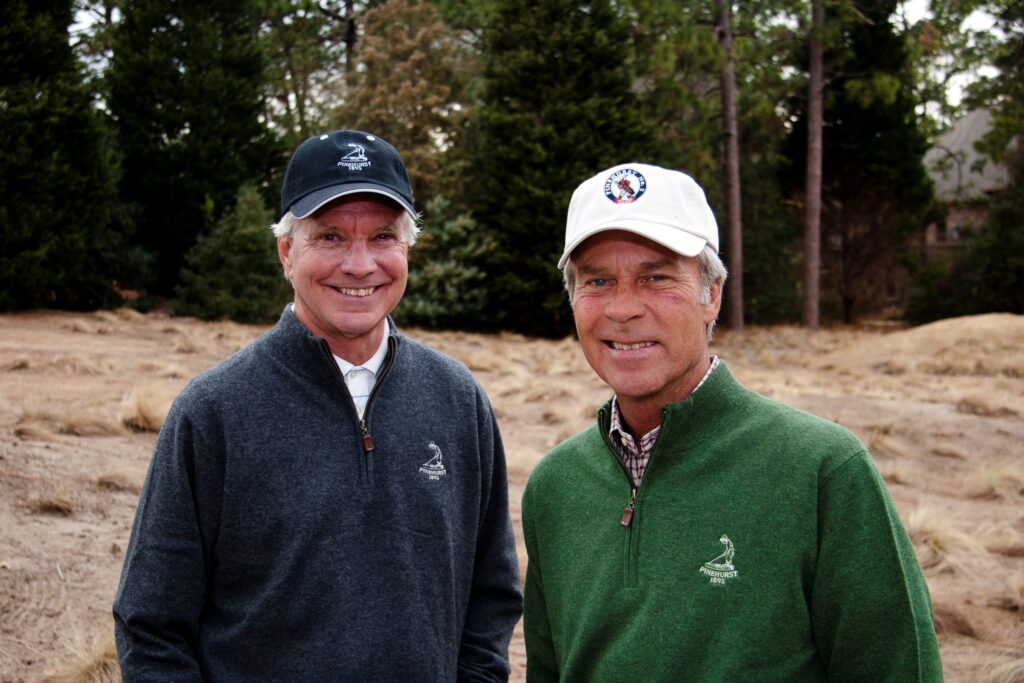 Golf architects Bill Coore and Ben Crenshaw each have a significant tie to the Sandhills and Pinehurst No. 2 from their respective early days in golf.

Coore was born in 1946 and grew up in nearby Davidson County. As a boy, he made frequent trips with adult golf friends and boys his own age to Pinehurst to play limitless summertime golf on No. 2, this before the advent of air conditioning and Pinehurst becoming a year-round resort.

“We’d tee off at daybreak,” Coore says. “It was five dollars. You got a little tag, a paper tag to put on your bag. We would start walking and playing. Far more than a few times we’d play 54 holes in one day, carrying our bag, on the No. 2 course. That was my earliest memory. It’s just an incredible place.”

Crenshaw was 21 years old when he joined the PGA Tour in 1973 after having won three NCAA individual titles at the University of Texas. His second professional event was the 1973 World Open, contested on the No. 2 and No. 4 courses during two weeks in November. Crenshaw finished second to Miller Barber and shot a 64 in one of the rounds. 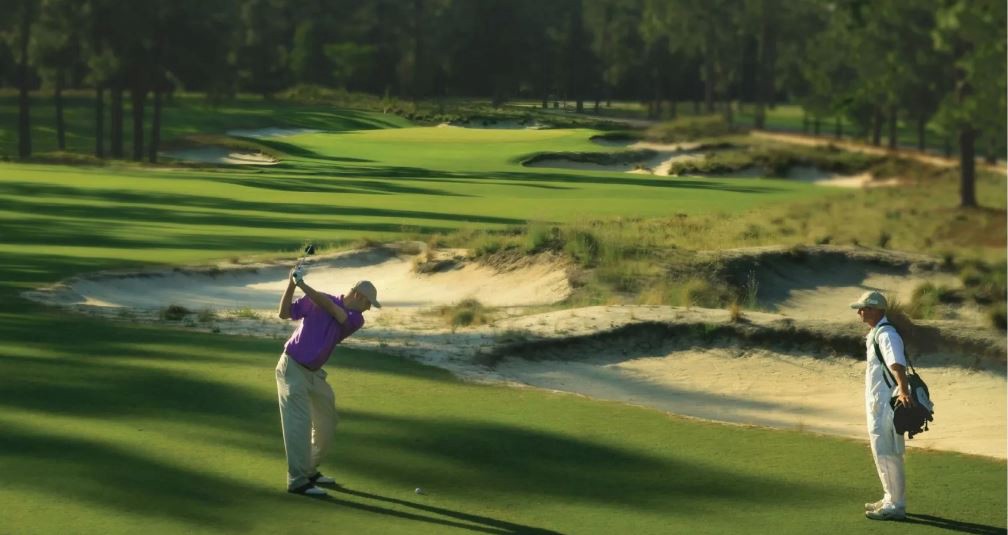 “It was my first trip to Pinehurst,” Crenshaw says. “I’d seen it in books, but when you see it, feel it, it’s something completely different about it. It’s a thinking man’s test. My earliest ideas on golf course architecture incubated at Pinehurst.”

Coore played golf at Wake Forest in the late 1960s and evolved into a career in golf course construction and design. Crenshaw carved a legendary career on the PGA Tour — with 30 victories and two Masters crowns — and they joined forces as a design team in 1985. After putting together a portfolio throughout 25 years that included noted courses such as Sand Hills, Chechessee Creek, Friar’s Head and Dormie Club — located just outside the Village of Pinehurst — Coore and Crenshaw were hired by Pinehurst Resort officials in 2010 to supervise a restoration of No. 2. The designers used their talent for creating natural looking holes with a minimal of fanfare and took No. 2 back to its mid-1900s heyday — wide fairways, unkempt bunkers, native roughs of hardpan sand and wire grass, and firm, bouncy fairways.

The assignment came at the behest of Pinehurst owner Robert Dedman Jr. and Pinehurst Resort President Don Padgett II, the latter a former tour pro who believed No. 2 had lost its way amidst the golf industry’s predilection for burnishing thick rough to combat the escalating distances that golf balls were flying in the early 2000s.

“It was a bold stroke to attempt to take Pinehurst No 2 back to the way it looked for all its glory days,” USGA Executive Director David Fay said in November 2010, just six weeks before announcing his retirement from the USGA. “It would be much the same as Oakmont showing its boldness by pulling out all those Christmas trees planted in the 1950s.”

Coore & Crenshaw used the center-line irrigation pipes that had existed from the mid-1930s to frame their shaping of the fairways, and they used aerial photos from the 1940s to further restore fairway dimensions and bunker shapes and placement. The architects also used many of the hundreds of photos in the Tufts Archives and their own experiences on the course as well, with Coore’s memories going back as far as his boyhood days in the 1960s. But none were as helpful as those irrigation lines and aerial photos.

“The photos and the old mainline irrigation pipes took the guesswork out,” Coore says. “We could base what we did on fact, not on supposition or opinion. We were tip-toeing around and a little reluctant at first. We got bolder once we had those pieces of the puzzle. We had evidence.”

The resulting course that reopened in the spring of 2011 was embraced by club members, resort guests, the national golf establishment and competitors in the 2014 U.S. Open. No. 2 had regained its essential character, a set of values instilled by architect Donald Ross in the manner of his home course in Scotland, Royal Dornoch Golf Club.

“We take great satisfaction in that it turned out well and it’s gotten better,” Coore said five years later. “It’s everything we hoped it would be and more. And there’s a sense of relief, that it actually did work. We believed it would work, but when you do something this radical, this dramatically different, you never know for sure.”

After all, it would have been a monumental whiff to come to America’s golf mecca and create something at odds with its essential character.

“Apart from just the golf and architecture here, the feeling of the place, Pinehurst means so much to American golf,” Crenshaw says. “From the turn of the century it has always been a leader, and it always will. It’s been a mecca. To be asked to contribute our ideas here is a high, high honor. We think the world of this place.”