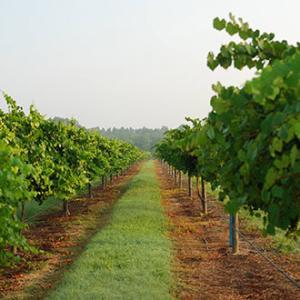 A pomegranate wine from Lumberton and a muscadine from Mocksville were the top winners in the 2016 N.C. State Fair Wine Competition sponsored by the N.C. Wine and Grape Growers Council.

Stephens Vineyards and Winery of Lumberton won Best of Show and the N.C. Winegrowers Cup for its Pomegranate Wine. The fruit wine also won the “Best Fruit, Honey, Dessert and Other” category.

Chestnut Trail Vineyard’s Fantasia won the N.C. Muscadine Cup. The winery, which opened in 2015, is located in Mocksville.

“Chestnut Trail Vineyard’s win is a great example of the constant evolution of North Carolina wine,” said Whit Winslow, executive director of the N.C. Wine and Grape Growers Council. “Here you have a newly opened vineyard in the heart of the Yadkin Valley, known for its European varietals, that is able to produce a top-quality muscadine wine on par with other wines produced in the state.”

In the amateur competition, Sandy Mendenhall of Greensboro won Best of Show for her Viognier/Gris wine.

The competition had 480 total entries in both commercial and amateur categories. “We saw about a 15 percent increase in entries compared to 2015,” Winslow said. “There were 397 wines in the commercial division and 83 wines in the amateur.”

Winners will be on display in the Education Building throughout the fair, Oct. 13-23. North Carolina wine also will be available for sample and purchase at the Got to Be NC Wine and Craft Beer tasting area in the Hunt Horse Arena outside Gate 8.