Donald Ross Could Golf His Ball 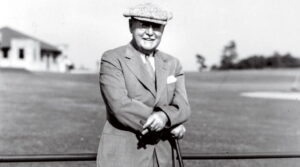 Anyone who has ever teed it up in the Pinehurst area knows the name Donald Ross. A transplanted Scot, Donald Ross fused his home course knowledge (Royal Dornoch and its elevated, contoured greens) and his study at St. Andrews (strategic options) to become the most honored and most prolific early American architect. Between 1919 and 1926, six U.S. Opens were played on his designs. Pinehurst No. 2 was his masterpiece, but Seminole, Oakland Hills, Oak Hill and Inverness weren’t far behind. In the Sandhills alone, he crafted Pine Needles, Mid Pines and Southern Pines, among others. Less known about Donald Ross? He could really play.

Born in Dornoch, Scotland in 1872, Ross had Royal Dornoch Golf Club practically in his backyard. During his teenage years, while serving as a caddie, he became proficient at the game, having the run of a rudimentary six-hole layout adjacent to the first tee of the big course. He soon matriculated to playing the famous links, which underwent modifications by Old Tom Morris of St. Andrews in 1886. After a year spent under Old Tom’s tutelage in St. Andrews from 1892-1893, Ross returned to Royal Dornoch as an accomplished player and took the job — well, jobs — as head  professional, clubmaker and greenkeeper.

Teeing it up at Royal Dornoch on a regular basis molded Ross into a genuinely fine player, complete with a readily identifiable swing technique. As Bradley S. Klein explained in Discovering Donald Ross, the USGA Herbert Warren Wind Book Award winner for 2001, “The firm, sandy conditions and howling winds at Dornoch produced a distinctive local swing suitable to the course’s shot-making demands. It was best to keep the ball flighted low. The combination of hickory shafts and gutta-percha golf balls did not make it easy to play a bold aerial game anyway; yet even decades later, after the advent of the modern rubber-core ball and steel shafts, Dornoch’s signature swing remained discernible. When Donald Ross learned the game, the prevailing swing called for a wide stance, with the right foot drawn back to keep the position closed at address. The ball was also kept well forward of center in order to sweep it rather than strike down on it. The result was a low draw that made for precisely controlled shots, especially into the wind. It was swing technique to which Donald Ross would always adhere.” 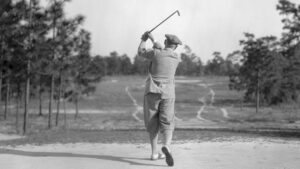 Indeed, that sweeping swing and low draw ball flight led to admirable results. Klein observes that Ross was a successful competitor until the age of 40 or so. Ross immigrated to America in 1899 and took a position at Oakley Country Club in Watertown, Massachusetts, 10 miles west of Boston. In 1905, representing Oakley, Ross captured the inaugural Massachusetts Open. He posted a 320 total, using the old gutta-percha ball. In 1911, he won it again, when the event was held at The Country Club in Brookline, host to a legendary U.S. Open two years later, and host again to the U.S. Open in 2022. Ross’ four-round total was 309.

Much of his year was now spent in Pinehurst and for good measure, he snagged three North and South Open titles, winning in 1903, 1905 and 1906. Klein notes that while the fields in the Pinehurst event may have lacked the depth and quality found in the Massachusetts Open, his efforts were quite impressive nonetheless. His stellar play continued in Pinehurst, as he finished as North and South Open runner-up in five consecutive years, from 1907 to 1911.

So how did he fare on a national level? Quite well. Ross was a prominent presence in the U.S. Open in the first decade of the 20th century, competing in seven tournaments. He wasn’t as successful as his brother Alex, who won the U.S. Open in 1907, but Donald had his moments. Four times he placed in the top ten, with his best finish a solo fifth at Baltusrol in 1903. He never held the lead, or truly contended in any of those events, but four top-10’s out of seven is extraordinary nonetheless.

It would be fascinating to have a modern Top 100 teacher evaluate Donald Ross’ swing. That’s precisely what Eric Alpenfels did. Alpenfels, Director of Instruction for the Pinehurst Golf Academy at the Pinehurst Resort, came upon a snippet of film showing Ross’ swing in action, using what looked to be a fairway wood. Alpenfels observed “a gentleman that is creating a ton of clubhead speed, a lot of whip of the clubhead at impact and (achieving) pretty good distance. What’s interesting is that at his age, how well he turns and how well he uses his body to create clubhead speed.”

Alpenfels goes on to point out how much stability Ross maintains in his lower body. “I’m looking at how much space there is between his knees,” said Alpenfels. “Yet he still has a full hip turn. Obviously he has a full shoulder turn. There’s not a lot of excess motion and it’s not wasted motion. It’s not only enjoyable to see such a great golfer and influential man in the game of golf, but also how this highlights his good technique.” 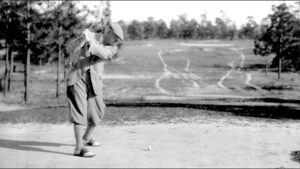 One final highlight in Ross’ major championship career occurred in 1910, when he competed in the Open Championship at St. Andrews. He and wife Janet celebrated the birth of their first (and only) child on October 18, 1909. As Klein relates the details, “Lillian was named after her paternal grandmother. Six weeks later, the infant accompanied her parents on their winter visit to Pinehurst. In the summer of 1910, the Ross family made its first journey back to Scotland.”

Ross, Janet and Lillian would enjoy a month with family and friends in Dornoch and another month in the Scottish town of Moniaive. While back on his home soil, Ross’s competitive instincts kicked in and he entered the Open Championship. It was a special occasion, the Golden Jubilee anniversary of the Open, having first been contested 50 years prior. Ross never threatened to win, but his performance was remarkable all the same.

Held from June 21-24, the event got off to an unusual start on Tuesday the 21st. A rare thunderstorm flooded the greens and halted play at 1:30 p.m. All previously posted scores were abandoned and the tournament started over on Wednesday the 22nd. From the 210 entrants, only the final 64 survived the cut of 161 to play the 36-hole final day on Friday. Ross qualified with room to spare, posting 78-79—157, which left him nine back of Willie Smith, the 1899 U.S. Open winner. Ross improved to a 75 in the third round, but still trailed leader George Duncan by double digits, after Duncan’s sparkling 71.

In the final round, Duncan collapsed with an 83, allowing one of the Great Triumvirate, James Braid, to zoom past with a 76 to win by four. It gave Braid a record-breaking fifth victory in the Open Championship. Ross held steady with a 77 and a 309 total, ten behind the winner, and good for an eighth-place tie. It also netted him the princely cash prize of 5 pounds. As a point of further pride, he easily beat the other two members of the Great Triumvirate in the field, defending champion J.H. Taylor, holder of four Open Championship titles, who would win another in 1913 and Harry Vardon, also a four-time Open winner who would go on to win two more, the very next year and again in 1914. That’s pretty exceptional play from a vacationing golfer — proving once and for all that Donald Ross the architect could flat-out play.

Joe Passov, a.k.a. “Travelin’ Joe,” has been writing about golf since 1991, with a specialty in travel, history and golf course architecture. In 2019, the American Society of Golf Course Architects honored Joe with its Donald Ross Award, for contributions to golf and to golf course design. He lives in Cave Creek, Arizona, with his wife Betsy.