Andy Forrester’s unique, animated, and off-the-wall humor has made him a favorite across the country for over 23 years. He’s worked
with such legends as Louie Anderson, Jimmie “JJ” Walker, Gilbert Gottfried, Marc Maron and many more. In 2008 Andy won the title of
Ultimate Comic at the Idiot Box in Greensboro, NC. In 2013 he won the Louisville, KY satellite of the World Series of Comedy. Over the years
he’s been seen at the Laugh Your Asheville Off Comedy Festival, the Laughing Skull Comedy Festival, Port City Comedy Festival, and the NC
Comedy Festival just to name a few. In 2017 Andy made his first TV appearance on the show “Pure-Flix Comedy All-Stars” hosted by Louie Anderson. In August of 2019 his Dry Bar Comedy Special “Most Of This Is Baby Fat” was released and has since been seen millions of times.
Andy was also recently featured on the new show, “Stand Up Nashville! – Live from Zanies” in 2020. While he has survived the pandemic, Andy is ready to get away from his family and make you laugh.
Drinks/beverages are not included but may be purchased at our sponsored locations and beer and wine may be brought onto the trolley for the show. 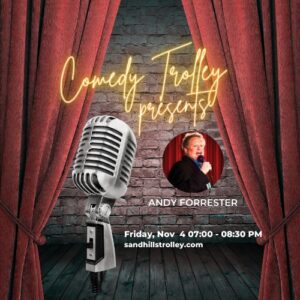