House in the Horseshoe Battle Reenactment 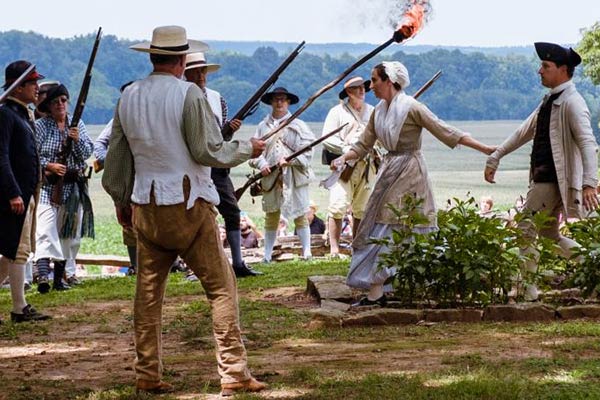 On Saturday, August 6, the battle reenactment will return to House in the Horseshoe. Nestled in the bend of the Deep River, the Alston House was the site of an American Revolutionary War skirmish between Patriot Col. Philip Alston and Loyalist Col. David Fanning in 1781.

The Saturday only event will take place 10:00am to 4:00 pm. There will also be food trucks and tours of the Alston House, where bullet holes remain. The program is free; parking is $5 per vehicle (cash only).

Visitors will be able to speak with interpreters about life in the 18th Century, walk through militia camps, and hear presentations throughout the day. The event will begin at 10:00am with a wreath laying ceremony led by the Sandhills Chapter of the Sons of the American Revolution. The battle reenactment will begin at 2:00 p.m.

Located at 288 Alston House Road, Sanford, House in the Horseshoe is 16 miles west of Sanford off NC 42 and 10 miles north of Carthage on the Carbonton-Carthage Road. The house was built in 1772 by Philp Alston. During the American Revolution Alston proved a fiery leader for the Whig cause. In 1781 the Alston house was the site of militia skirmish between the owner, Whig Col. Philip Alston, and Loyalist Col. David Fanning. The house still bears some the scars from this engagement. From 1798 to 1814 the House in the Horseshoe, under the name Retreat, was home to another Patriot leader and four-time North Carolina governor, Benjamin Williams.