Golf course architect and current Sandhills resident Kyle Franz is busy overseeing a renovation of the Donald Ross design at Southern Pines Golf Club, following his earlier work in the area at Pinehurst No. 2, Mid Pines, Pines Needles and Pinehurst No. 3. Currently, Franz’s restoration at Southern Pines is being performed in two stages. Depending on weather, which has been challenging during the early parts of 2021, the 18-month improvement plan is expected to be completed in late August or early September.

In part 2 of a multi-part Q&A series with golf writer Brad King, Franz discusses the various eras of Ross’s design work around the Sandhills and how Ross’s golf course design work compares to the artistic musical genius of The Beatles. 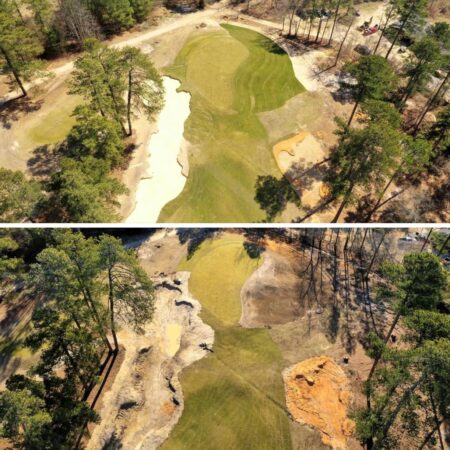 Brad King: I’ve read that the Southern Pines project is being performed in two stages?

Kyle Franz: “Correct. During the winter, we’ve been working on bunkers, irrigation and a lot of drainage-related projects. We’ll do greens work in the summertime. The greens were changed in the early 1990s, so we’re going to work to make them feel a little more Ross-like and make them as cool as we possibly can. We’re doing a lot of classic Ross work on the bunkers right now, just trying to naturalize them.”

BK: You’ve previously discussed the different eras of Ross’s artistic design work. Where does the Southern Pines project fit into the timeline?

KF: “Southern Pines is a different period of Ross work — more of his teens and ‘20s work, with bigger bunkers, more islands. I hate to use the words ‘forced carry,’ because I think that sounds kind of cliché. But he had a lot more in the way of little ‘jumps’ between fairways during that period of work, where you have areas that you just hit it across the wire grass and sandy native areas — even the occasional blind bunker, being close to the Scottish roots — instead of just having a fairway end-to-end, like a lot of his later work. He was a little more of a ‘anything goes’ kind of mentality during those years. Getting closer to his years back in St. Andrews, when he apprenticed there, more in the way of blind bunkers like you’d see on a hole like, say, No. 12 at St. Andrews. I spent a lot of time looking at that period of Ross’s work as we prepared for the project and tried to inject in what I thought was going to work, and what I thought he would have done with Southern Pines — especially since it’s an older course and he worked on it early on in his career — so it made a lot of sense to do it that way.” 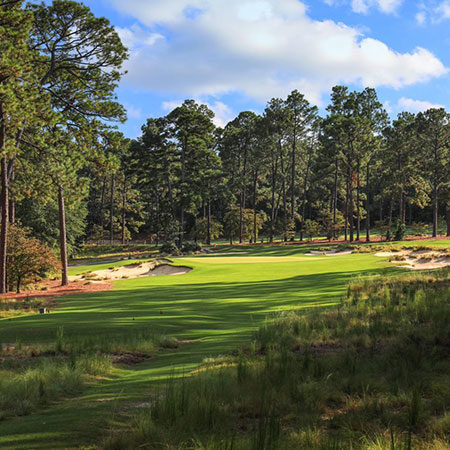 BK: How would you compare Ross’s work at Southern Pines with his other courses you’ve worked on around the Sandhills, including Pinehurst No. 2, Mid Pines and Pine Needles?

KF: “The Pine Needles project, we went with more of his mid- and late-’40s stuff, which made sense because it was the last of the courses built. And Mid Pines (pictured left) was sort of in the middle, so we went with the 1930’s version, where we have the big, beautiful high flashes and whatnot. It’s almost (Alister) MacKenzie-esque sort of a bunker in style, when they built the actual grass green complexes. And then when we did Pinehurst No. 2, it was kind of a blend of both, so it was very maintainable when they were having the U.S. Opens, but also had at least a little hint of that style. So, Southern Pines will be the oldest one of the time periods. It’s a period of Ross’s work that I’ve always been very intrigued to work in. We did incorporate some of the elements from that period when we did the work on course No. 3 at Pinehurst. That’s kind of a small project we did. It wasn’t a complete make-over of the entire golf course, but we certainly put in pieces and elements of it. And some of that does very much reflect that period — several features we put in that were right out of that period from photos of that period.” 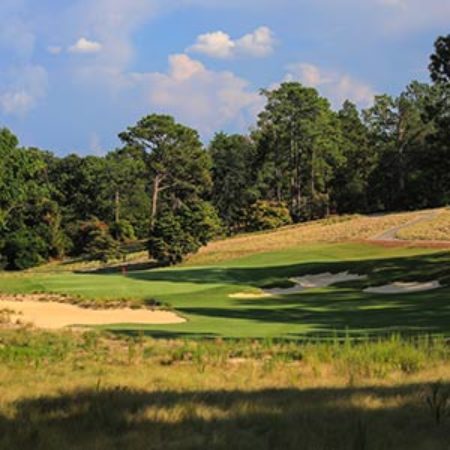 “For Pine Needles (pictured left), we wanted to make it very maintainable for the Women’s Open. So, it made sense to go to the period of his later work, to where they got kind of honed into what was more like rolled-over grass face bunkering and whatnot — very user-friendly. So, we’re just trying to kind of mix it up, project to project, and give people a little bit of a different look at his different periods. I think probably any golfer that plays Mid Pines and Pine Needles will notice the differences between the two right out of the gates. It’s just a different look. So, we’re just trying to keep everything fresh and new and interesting.” 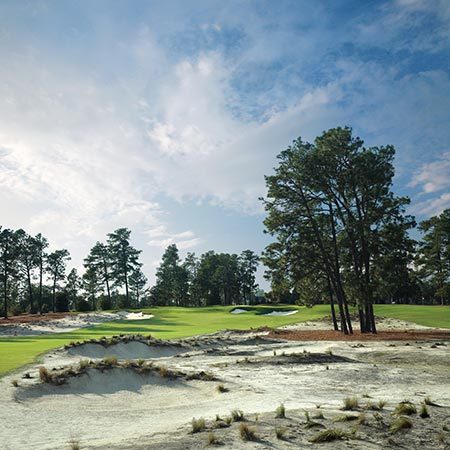 “No. 2 (pictured left) opened in 1907 and then Ross worked at Southern Pines starting in the teens era. I think that period of work had a little more of an artsy sort of quality to it — more blind bunkers, more smatterings of bunkers. And again, the little jumps in the fairways occasionally. The period of work that we chose to restore for Pinehurst No. 2 is more about 1940 or so. In Ross’s years, you can’t find like a single year or map or aerial photo where (No. 2) was the same. It was always changing, always changing. He was always kind of tinkering with it and doing different things with it. So, I think as a legacy project, it made sense to go with his last rendition. “

“The analogy that I made is, it’s kind of like The Beatles, for example. There’s a huge difference between, like, guitar jangle pop of those early years and then Sergeant Pepper’s or The White Album. There are different periods by an artist who is trying to do different things.”