Kyle Franz’s restoration at Southern Pines is being performed in two stages and is expected to be completed in late August or early September of 2021.

In part 3 of a multi-part Q&A series with golf writer Brad King, Franz discusses the unique topography around the Sandhills and what it was like working at Southern Pines Golf Club during one of the coldest and wettest Februarys in recent memory. 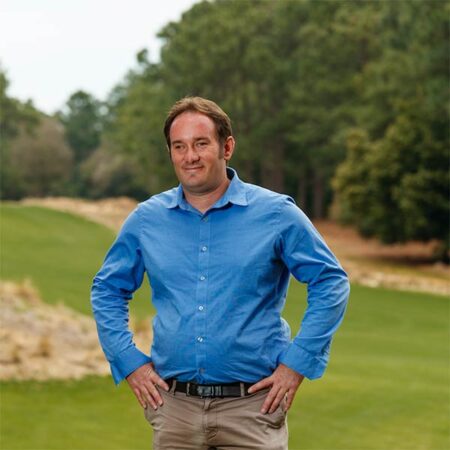 Brad King: I understand that you’ve been able to do the work at Southern Pines and still leave at least a portion of the golf course open for play. Are golfers still playing all 18 holes most days?

Kyle Franz: “Yes, most days the entire golf course is open. If there is some bigger operation that would be traumatizing for the golfers and dangerous for the workers, we will close it down for that period. But almost the entire time, the golf course has been open.”

BK: Have you ever done a project like that, where you worked on it and it was still being played?

KF: “Yeah. Absolutely. I did that at Mid Pines. It was open for most of it, actually. Then at Pine Needles, it was open. Most of the projects have only closed down for the green complexes, to redo the greens and re-grass them. So, most of the time they’ve been open. And, in this case (at Southern Pines), it’s actually worked out, in one sense, with the golfers, it’s worked a little bit better because the golf course has remained open for when they do want to play. But the weather’s been terrible. So, they’ve been able to take off the days when they felt like it and still had it available to them. Whereas during the Pine Needles project, we actually had a project going on, but the weather was also really, really nice. So, it was a little bit harder for us to get our work done as efficiently as it possibly could have, just because there was so much play going on a lot of the time. (On the Southern Pines project), the weather has been pretty nasty for the construction with all of the rain that we’ve had — this kind of historically rainy period that we’ve been going through — it’s been a little tougher on construction, but the golfers are still getting a little bit (of play) in. At least we haven’t had any snow.” 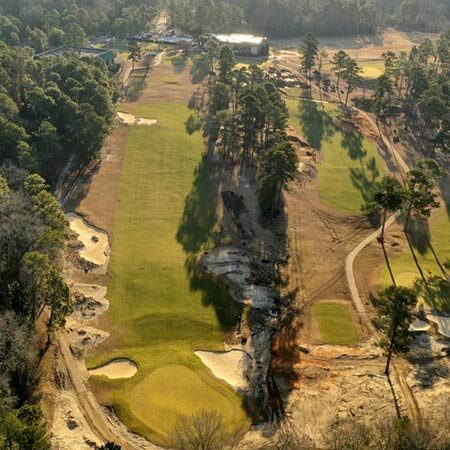 BK: You can still do some work behind the scenes when it’s bad, but I guess it’s challenging to get the guys working when it’s pouring down rain?

KF: “Yeah, it just gets so wet that it’s almost impossible for us to get done what we need to. But we’ve also been able to work quite a few days. We’ve had like a day a week where we couldn’t work, because it’s been so nasty that we’ve run into some kind of problem. So, it’s definitely been a trying period for the weather on the project, but we were very lucky during the Pine Needles project where there was just almost no weather. I think we only lost, like, a half-day to weather during that project. Whereas this time, it caught up with us. Pinehurst No. 2 was a very challenging project. We had multiple snows and some very, very cold periods, where the ground was simply too frozen for us to do anything. So, sometimes you win. Sometimes you lose.” 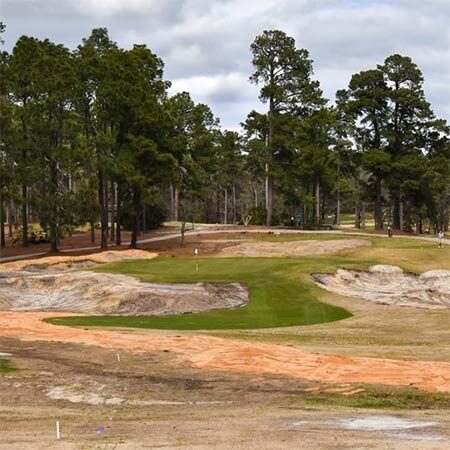 BK: How would you summarize the Southern Pines project thus far?

KF: “Southern Pines is just such a great property. I personally think it’s the best piece of topography on the ground of any of the courses in Pinehurst. So, for us, it’s a dream come true. As I joke to the membership, we’ve been working on this master plan for 10 years. I started dreaming about it when we were working on Pinehurst No. 2, and I would go out and play it when we were working on Mid Pines and Pine Needles. There were a couple of dress rehearsals, where Kelly (Miller) was close to getting (ownership of the golf course) before and so, we’ve spent time walking around (the course) and theorizing about it. So it’s great that it’s finally all coming along. Especially since we have some really good concepts we can throw in there. The idea that we can do more using some influences from (Ross’s) teens and 20’s stuff. It’s nothing actually new. I felt like that would be a cool design style to do on one of the golf courses. I felt whichever course came first, Southern Pines or some of the other ones that had been potential project courses that this is going to be the right one. I thought that maybe you know Course No. 1 for Pinehurst would have been a cool concept. But Southern Pines has the length to really make Ross’s concept sing in that category, where you do have some more jumps in fairways or forced carry sorts of things. I’ve always felt like this was the right project for the right concept over there. So, it’s great that it’s all come in line and it’s actually happening.” 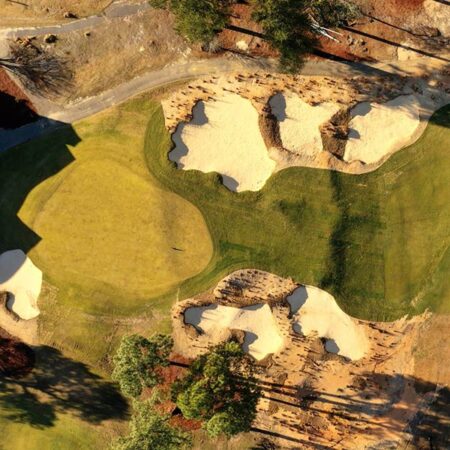 “It’s a dream come true for us, that’s for sure. For both Kelly (Miller) and my staff. I mean, we have a great, talented group of shapers on it. Matt Smallwood, who worked on my Pine Needles stuff and Raleigh (Country Club), doing bunkers and greens and whatnot. And then Eamon Sullivan, who worked with David McLay Kidd on a bunch of his projects. He’s never worked in Pinehurst before. So it’s a nice thing I think to get some people with a little bit of a fresh perspective on it. And Dan Proctor who worked on Pinehurst No. 2 and then also worked at Mid Pines for me and he was actually the person that introduced me to Southern Pines. We went over and played it shortly after we started the work on No. 2. He said, ‘Hey, you have to go check out Southern Pines.’ And that’s how I became familiar with it for the first time. So, it’s great to get Dan back involved with it, since he’s a big fan of it as well.”

BK: There are a lot of worlds colliding for you with the Southern Pines project. That’s exciting.

KF: “We’re really having fun out there, that’s for sure.”