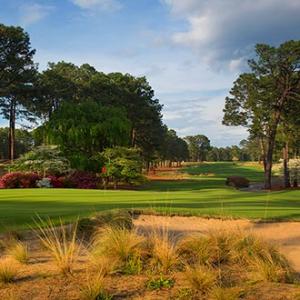 The Pinehurst, Southern Pines, and Aberdeen Area of North Carolina was awarded six of the Top 100 courses in Golf Digest’s 2017/18 ranking of Public Courses You Can Play. The area topped Pebble Beach/Monterey Peninsula (four courses), Bandon Dunes (four courses), Bend Oregon (three courses), and many other golf destinations that were recognized with two or less courses.

The ranking doesn’t surprise the thousands of golf groups that make their annual pilgrimage to the Home of American Golf® in central North Carolina to test their game among the 40 legendary courses. Since the early 1900’s, golf has been a key element of the culture – it was home to golf course architect Donald Ross and hosted touring golf pros like Ben Hogan and Annika Sorenstam who won majors here.

The six courses that are included in the Top 100 are Pinehurst No. 2 (ranked 6th), Dormie Club (ranked 49th), Tobacco Road (ranked 55th), Pinehurst No. 8 (ranked 64th), Pine Needles (Ranked 68th), and Mid Pines (ranked 94th). Half of those six were designed by the distinguished architect, Donald Ross.

The five states with the most representation in the ranking include California, Wisconsin, Oregon, North Carolina, and Michigan. They account for 41 percent of the 100 total courses ranked. Notable for these top golf destinations is they are generally located in rural resort communities, most with county populations less than 100,000.