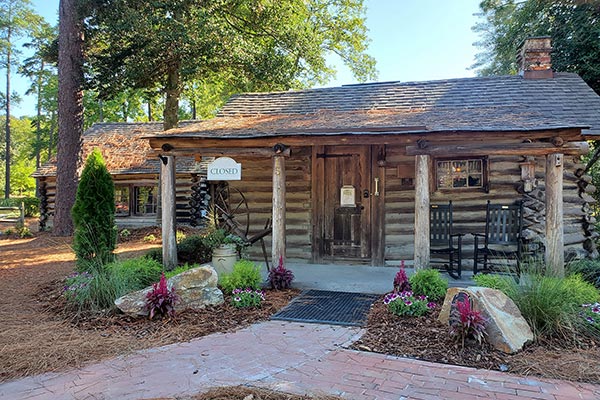 Most folks just know it as the cabin.

Crafted without nails in 1810, the “one-room” cabin is the official Pinehurst welcome center and home to the Sandhills Woman’s Exchange, one of 19 remaining in the United States.

Once, there were 97 in an era when isolated farm wives could earn extra money by selling their handmade items through co-ops. Today, the Sandhills exchange is both the smallest and the only one to offer lunch, a menu of sandwiches, salads, soups and homemade desserts, served by volunteers since Jan. 15, 1957.

President Karen Lehto moved around the country with her Army husband, living in such places as Texas, New York and Hawaii before settling in Moore County. She says she feels a special kinship with the cabin because men from her own family have fought in every American conflict since the Revolution, as the cabin has stood through countless crises.

It was built at Ray’s Grist Mill just northeast of Pinehurst. After the Civil War, Archibald McKenzie bought it and used it as a kitchen. In 1895, Pinehurst founder James W. Tufts acquired it and moved it to its Azalea Road where it sits across from the Village Chapel. It became a curiosity, displaying a few old household items for his Northern guests. Former slaves lived in it, and tame deer came there to feed. In 1923, Tufts gave the vacant cabin to the newly fledged Sandhills Woman’s Exchange. The cabin is on the National Register of Historic Places, No.12 on a walking tour of Pinehurst.

Today, the cozy cabin comes with modern conveniences – electric light, heat – but the original fireplace still dominates the main room, large enough to handle 6-foot logs. Over the years, 10 more rooms have been added to house a kitchen, showroom, dining room and other nooks and crannies necessary for storage and record keeping.

Most folks are here for lunch, especially the homemade soups like split pea, lobster bisque and the popular chili, available every day. Nine tables seat 35 people. Volunteers and Debbie Ewing, the cook and only full-time employee, serve lunch Tuesdays through Saturdays. The exchange showroom is a few steps away, open on the same days from 10 a.m. to 3 p.m..

But you’ll find yourself out of luck if you try to grab lunch or shop in the summer or around the Christmas and New Year’s holidays – the entire operation closes for hot weather in May and reopens in September. Volunteers take another break in late December, reopening around Feb. 1.

Even so, that’s a lot of chilly mornings and steamy afternoons in a 200-year-old cabin. Volunteers are loyal, including 94-year-old Betty Hogg who has helped out at the exchange for 45 years.

Karen Lehto says she found a family here, a refuge when she lost her mother in 2005. Treasurer and general manager Carole Southon became a widow with the sudden death of her husband at 61. Ewing found herself encouraged by this community of women to take culinary arts classes.

It was Ewing’s idea to add chili to the menu, a move that attracted more men to the popular ladies’ lunch spot. A beef hot dog with chili, cheese and trimmings is named for the late Mayor George P. Lane, who loved to eat lunch at and was a tireless promoter of the exchange. It was his idea to create a village welcome center in the cabin in 2010.

The money generated from serving lunch is a major factor in the exchange’s survival. It props up showroom proceeds in lean times such as the 2008 economic downturn that followed a four-month closure because of flooding from Tropical Storm Hannah.

“We need the public to support the sales, and the lunch,” Lehto says.

Times have changed, but the exchange still helps women in need by providing a place for them to sell their crafts. Constant spending is necessary to maintain the 200-year-old cabin. Seeking donations from sponsors and fundraisers is a way of life when proceeds from the sale of handmade items and meals are eaten up by a winter oil bill that runs into the thousands.

Lehto has put a background in hotel management to good use as president. It also helps that she is a craftsperson who has helped consignors improve their products. Lehto, the mother of two teenage sons, has volunteered for the exchange for five years, serving stints in publicity and general management, first as co-president and now president. Members have convinced her to accept a second term.

“I was always a volunteer where I lived,” she says, often for thrift shops on military installations.

But she admits to a soft spot for the exchange.

“Everyone here has a passion for the cabin.”

The Cabin is open seasonally, Tuesdays-Saturdays (closed in the summer and winter months) beginning in September.  For more information about the Exchange, its hours and directions, call 910-295-4677. 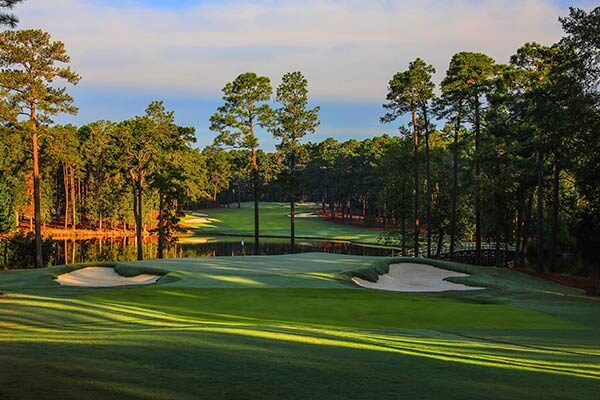 Pinehurst No. 2 Continues to Lead the Way In 2021 N.C. Golf Panel Rankings 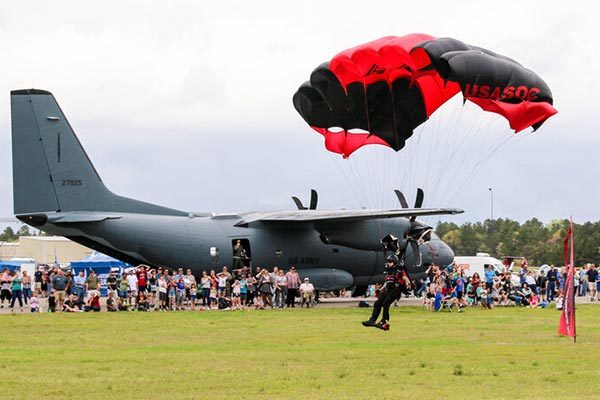 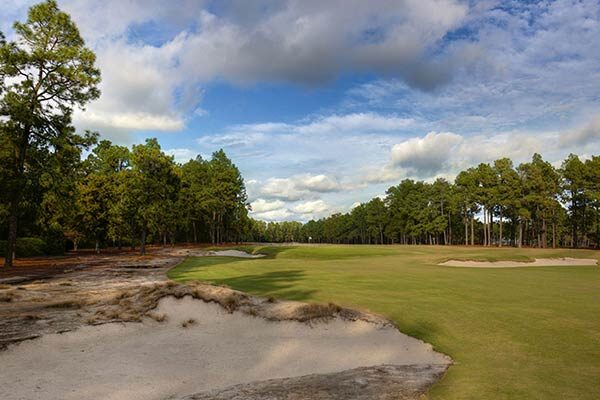