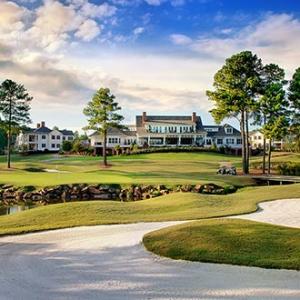 Mid South’s New Greens Are Expected To Be True Rolling, Fast And Better Conditioned Year Round

Last summer, the green complexes at Talamore Golf Resort near the Village of Pinehurst were converted from bent grass to Champion Bermuda and have received rave reviews. Now, Talamore’s partner property across the street at the Arnold Palmer designed Mid South Club is undergoing a similar golf course restoration and greens conversion, along with numerous other club enhancements. In all, these projects are among $6 million in capital improvements at Talamore’s four North Carolina and Pennsylvania facilities.

A quarter century after this renowned Sandhills resort first opened, the Talamore green complexes were restored last year to their original 1991 Rees Jones design by recapturing the greens surrounds, which had been heavily encroached by native Bermuda grasses. In addition to true rolling and lightening fast greens, the new strains of Bermuda are providing significantly better playing conditions year round.

Following up on the successful remastering at Talamore, the greens at Mid South Club are now being converted to Champion Bermuda. To ensure the design continuity of the putting contours, Mid South and Talamore employ the “no till” method pioneered by Champion Turf Farms out of Texas. More than 700 courses nationwide have Champion Turf including Pinehurst No. 2.

As with the Talamore project last summer, Mid South will be working with Jeffrey Stein, Carlos Perez and the entire team at Shapemasters. Based in Southport, N.C., Shapemasters is one of just a handful of certified golf course builders. Shapemasters has worked with every modern era architect including Jack Nicklaus, Arnold Palmer, Rees Jones, Pete Dye, PB Dye, Greg Norman, Tom Fazio and more.

“We are excited to be working for the Talamore organization again this summer,” said Jeffrey Stein, Shapemasters President and Founder. “The Mid South course is one of Arnie’s best ever and will be greatly enhanced with new Champion greens. Green sizes will increase by 20 percent to as much as 40 percent and will change the way the course feels and plays — all for the better.”

While the Mid South greens remodeling project is being conducted, the club will also add a new set of forward tees to many holes. These new tees promise to be a welcome addition to the golf course and are expected to provide a more player friendly approach for those just learning the game — as well as those looking to move forward for a more enjoyable playing experience. Mid South is also busy improving the club’s cart path system, with most areas are being removed and restored with a natural packed sand base. The paths will be re-concreted where necessary due to grade or traffic patterns.

Also in store for 2017 at Mid South are member facility upgrades to include the addition of basketball and pickle ball on one of the tennis courts, as well as a new barbecue and hospitality area at the Mid South pool. Matt Hausser, the Resort’s General Manager and Brian Anderson the Mid South Head Golf Professional are also rolling out a plethora of new Member events for 2017 — both on and off the course. “Many new events and services were added in 2016,” said Hausser. “All the events and camaraderie were well received. We want to keep the momentum going and for 2017 will be enhancing the Member calendar with new themes and activities.”