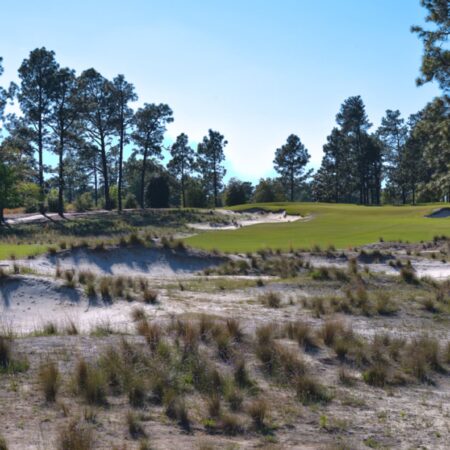 Ripping out grass on a U.S. Open golf course was, indeed, an extremist move.

Stripping it of a sense of order and uniformity flew in the face of convention.

Trading elegant green for disheveled brown wasn’t a direction most owners and managers of world-famous courses would have tread.

But Pinehurst owner Robert Dedman Jr., CEO Don Padgett II, and architects Bill Coore and Ben Crenshaw were willing 11 years ago to roll the dice on Pinehurst No. 2, the site of multiple major championships throughout more than a century.

Starting in February 2010, Coore and Crenshaw and their team of shapers and rakers and planters engineered a stunning overhaul of the original work of the famed Scottish golf architect, Donald J. Ross. For 13 months, they rebuilt fairways lines, bunkers and all the acreage surrounding every hole. Out came 40 acres of dense Bermuda grass and 550 irrigation heads, and in came the native hardpan sand of the Sandhills and 80,000 new wire grass plants and assorted vegetation.

When it reopened in March 2011, No. 2 harkened back to the days of Billy Joe Patton and Bill Campbell wearing cashmere sweaters, while winning multiple North and South Amateur titles. Coore & Crenshaw were shooting for a restoration to the broad era from the 1940s through the 1960s, when No. 2 was taut and wide, bouncy and unpredictable. 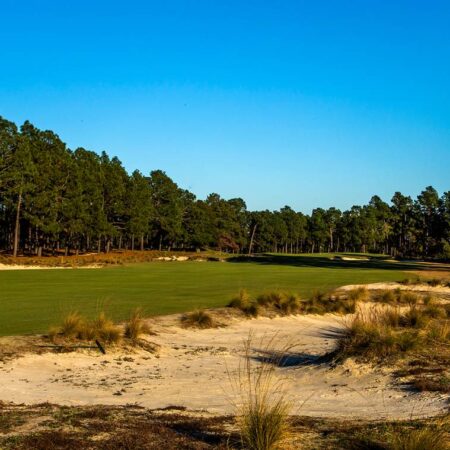 “There were whispers in golf that No. 2 had become like the uncle no one wants to talk about,” Padgett remembers. “To most people, everything was okay. But the golf course had lost some of its luster and reputation.”

As Dedman so aptly remarked, “This will be the best thing we ever do or the worst.”

With the benefit of a decade of hindsight, it’s certainly the former. The revamped golf course was immediately embraced by the locals and the outsiders as well — most notably the competitors in the 2014 U.S. Open and U.S. Women’s Open.

And just three years away from another Open, the course still exudes the multi-textured and colored look of Ross’s native homeland of Scotland. 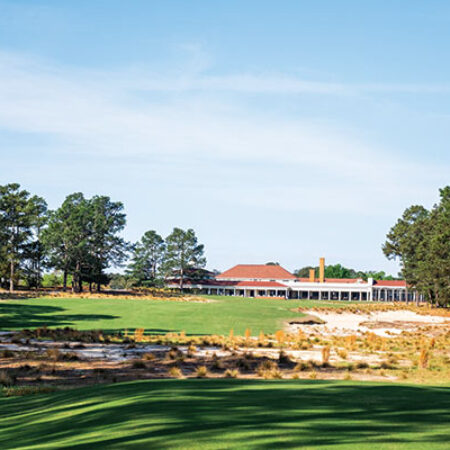 Padgett, retired since 2014, still plays golf frequently and paused from a putting session in July 2021 to look around at the activity at the resort. Nearby, the par-3 Cradle course and the Thistle Dhu putting course were teeming with golfers. Tee sheets for all five courses at the main clubhouse were jammed, including those on the No. 4 course rebuilt in 2017-18 by architect Gil Hanse. That evening, the golfers would retreat to an array of dining and drinking options, including the Pinehurst Brewery, opened in 2018 on the site of an abandoned steam plant, and the North & South Bar in the newly renovated Manor Inn with an array of nearly 70 brands of bourbons, whiskeys, ryes and Scotch. 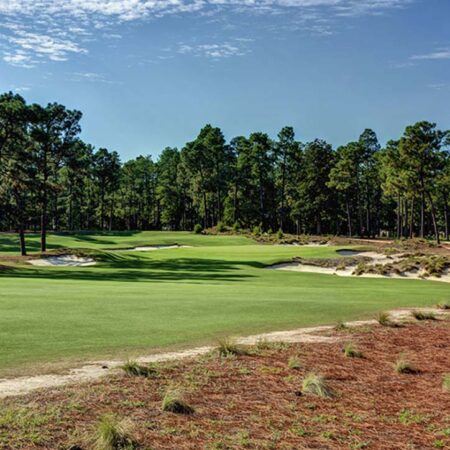 “Pinehurst today is way more current than it’s probably been since the ‘40s,” Padgett observes. “In the ‘40s, it was current. That’s what people were doing. Over time, we’d started having a hint of a museum. It’s not that way anymore. It draws on its history, but the overall experience is very current.

“Bob Dedman feels like it all started with No. 2, doing something radical. There’s nothing more radical than what we did. It changed the way he thought about the entire operation.”

Coore today is 75 years old and still has a full plate of designing courses along his longtime partner, the two-time Masters champion Crenshaw. He’s not actually seen the course since 2019, but he stays in touch with Pinehurst officials, and in 2021 dispatched associate Dave Axland to Pinehurst to rebuild some bunkers that needed their dimensions and banks buttressed.

“It’s hard to believe it’s been 10 years,” Coore says. “We take great satisfaction in that it turned out well and it’s gotten better. It’s everything we hoped it would be and more. And there’s a sense of relief, that it actually did work. We believed it would work, but when you do something this dramatically different, you never know for sure.” 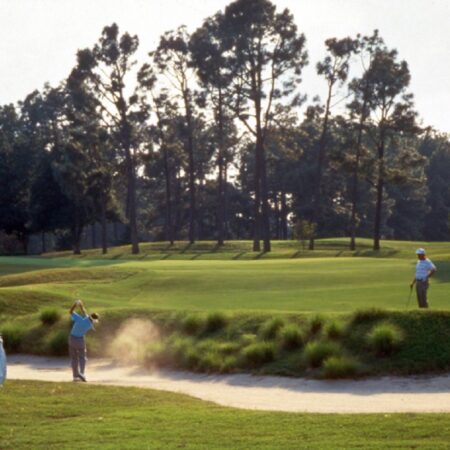 One of the highlights of the restoration when it debuted and still in full force is the myriad of colors of visual stimulation. The appearance of No. 2 had evolved into monochrome green with neat circles of white bunkers. Now it’s anything but. The emerald fairways give way to the natural colors of the bunkers — filled with a darker hue of sand — and the sandy roughs.

“What I see is the attractiveness of a different palette of color,” Coore says. “Before, you had just one shade of green everywhere. Now you have everything from all shades of green and brown to all the stuff in between. That, in it and of itself, is an attractive picture.”

The restoration project was never about adjusting Donald Ross’s No. 2 course for the 2014 U.S. Open. The purpose simply was to restore the width and bounciness of the fairways and remove the “Bermuda creep” of four decades. To return the perimeters of the holes to the native hardpan sand, wire grass and pine needles that reflected the look from what many call Pinehurst’s “golden age.” 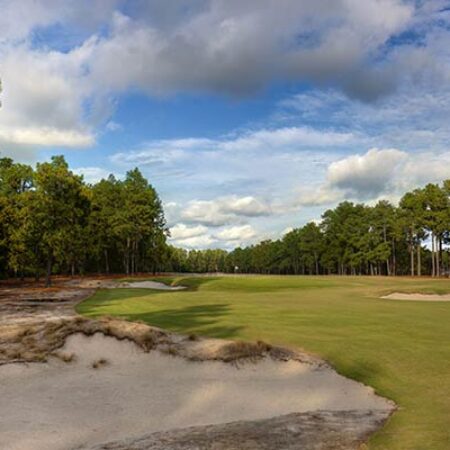 “It’s like Pinehurst has been rediscovered,” Coore says. “It’s been refined and enhanced.

“The timing was perfect. No. 2 had evolved in a not very positive fashion over the previous couple of decades or more. It was time. It was time to do it. The mindset of the golfing world was open to something like that, as radical as it may have seemed. A lot of golf courses in the early 2000s were popping up that were more natural in their presentation. They were getting a lot of acclaim. Suddenly, every golf course didn’t have be as perfect as Augusta National. They could be more natural and reflective of their native environment. That’s what No. 2 had been and what we tried to take it back to.”

Mike Davis, who was promoted from the USGA senior director of rules and competitions to executive director in early 2011 following the retirement of David Fay, made several trips to Pinehurst to walk the course with the architects during the restoration process. He had ruminated with USGA officer Jim Hyler, who would ascend to the association presidency in 2010, during the 2008 U.S. Amateur on No. 2 about how interesting it might be if one of the very few areas of hardpan sand and wire grass on the course, just to the right of the third green, was expanded throughout the course. So the USGA was very receptive to that same concept when Dedman and Padgett formally proposed it in June 2009. 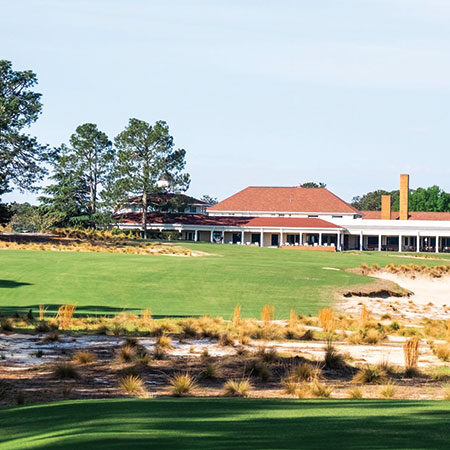 “That project was so important on so many levels,” says Davis, who stepped down from the USGA in 2021 to pursue a new career in course design. “It took one of the great golf courses not only in the United States, but in the world back to its grandeur. It brought back its personality. It also showcased the single-row irrigation, how you could maintain a course with less water, that it could be somewhat tannish-brown and still be beautiful. It certainly played beautiful in 2014.

“When you talk about great courses in the world and making dramatic changes, that has to be right up there with the best of the best. When Oakmont got ‘de-treed,’ so to speak, that was a big moment in time. I’m not sure anything was bigger than what Pinehurst did.” 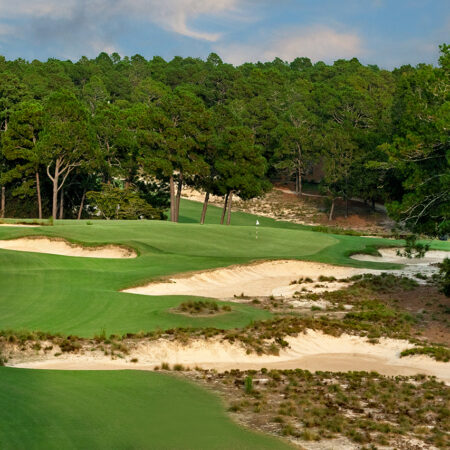 The moment that 2014 fortnight of men’s and women’s golf ended, No. 2 was shut down for its greens to be converted from bentgrass to ultra-dwarf Bermuda. That, plus the work Coore & Crenshaw did, will give the 2024 Open field a different presentation altogether.

“Both were game-changers,” says course superintendent John Jeffreys. “Before, with bent greens, we were babysitting the greens all summer. Today it’s not as much a grind as it was dealing with the bent. We’ve freed up labor to maintain the rest of the golf course. Plus, the firmer Bermuda greens are a better match with the firmer fairways and the tight surrounds.”

Like everyone involved in the nitty-gritty of that restoration process in 2010-11, Jeffreys shakes his head that it’s been a decade. He vividly remembers the maintenance crew working long days around Christmas and New Year’s 2010 in sleet and snow on resodding the golf course, knowing that tee times had been booked for March.

“Now here we are, an anchor site for the U.S. Open,” he says. “I don’t think we would be fortunate enough to call ourselves the first anchor site for our national championship if it was not for what Bill and Ben did 10 years ago.”

Author Lee Pace followed the Coore & Crenshaw restoration process and wrote about it in his book, “The Golden Age of Pinehurst—The Story of the Rebirth of No. 2.” It’s available on Amazon and in the Pinehurst Resort golf shop.