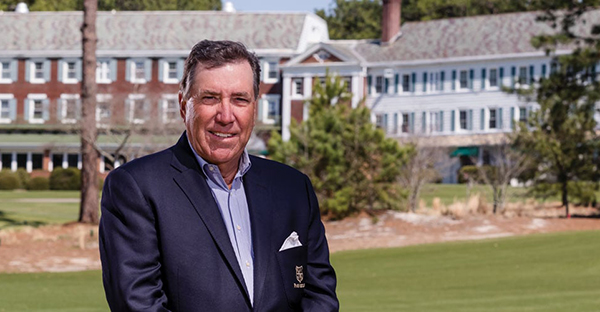 Kelly Miller had no idea what he was getting into when he married one of Peggy Kirk Bell’s daughters and moved to Southern Pines in 1982.

“The Bell family and Pine Needles kept me in the game of golf,” Miller says. “I wanted to get into business of some kind, I wasn’t sure what.”

Miller grew up in Indiana and attended the University of Alabama to play golf, and there he met Peggy Ann Bell, the middle child of Peggy and Warren “Bullet” Bell, the owners since 1953 of the Pine Needles Lodge & Golf Club that featured a 1928 Ross course.  Since the Bells’ oldest daughter, Bonnie, was traveling the country with her husband, Pat McGowan, on the PGA Tour, and son Kirk was just entering college, it fell to Kelly and Peggy Ann to follow in the footsteps of Peggy and Bullet in running the golf course and lodge. The timing was made further prescient by the fact that Bullet was diagnosed with cancer in early 1984 and passed away that May.

“I was an early riser—I’d get here at six in the morning and then Peggy Ann took the night shift,” Miller says. “She would work from three to 11 or whatever it took. We tried to do the same things Peg and Bullet had done for so many years—mingle with the guests, make sure they felt welcome and had a great experience.”

Kelly eventually became general manager and along with his mother-in-law led the family and resort to taking their spot in the Sandhills and Pinehurst-area explosion of the 1990s. In 1991, Pine Needles was awarded the U.S. Women’s Open for 1996 (and it would further host the event in 2001 and 2007 with a fourth coming in 2022). The family partnered with three individuals in buying the Mid Pines Inn & Golf Club across Midland Road in 1994. Miller struck a deal in 2012 with an eager and creative golf course construction worker and aspiring architect named Kyle Franz to renovate the 1921 Mid Pines course, and that project was roundly applauded by the golf world in 2013, leading Franz to supervise similar work at Pine Needles over the following years.

“It’s been quite a ride,” Miller says. “I’ve been here 40 years now, so it’s pretty amazing. We’ve been hosting these championships now for 25 years. Time goes quickly. But it really did start with the 1991 and ’92 Tour Championships at Pinehurst No. 2. That spawned the ’94 Senior Open, the ’99 U.S. Open and everything that’s come since. It’s hard to imagine.

“I know they called some of the older days at Pinehurst ‘the Golden Era,’ but seems like we’re really living in it right now.”

The demands of learning the business and starting a family that eventually included three children (and now including two grandchildren) cut into Miller’s time on the golf course in the 1980s. After getting established in both arenas, he made time to rekindle his competitive golf fires and over the decades has become one of the most accomplished “mid-amateurs” in the Southeast, his resume including wins in the Azalea Amateur at the Country Club of Charleston, the Coleman Cup at Seminole Golf Club in Jupiter, Fla., the North Carolina Mid-Am and the Carolinas Mid-Am.

“There were a lot of years that I wasn’t playing much golf because I was just trying to hang on and learn the business,” he says. “I started to get the itch to play more golf and my mother-in-law told Peggy Ann, ‘If he wants to go play in a tournament, he needs to do it. It’s good for him and it’s good for business.’ So I had my mother-in-law’s blessing.”

Peggy and Bullet were longtime friends with golf architect Pete Dye and his wife Alice (Peggy and Alice were at Rollins College at the same in the 1940s), and they’d had conversations about Dye designing a second course for Pine Needles on land the family owned adjacent to holes on the back nine of the existing course. But the Gulf War in the early 1990s and the ensuing recession tabled those plans, and when Mid Pines became available in 1994, the family took the opportunity to buy the course, thus having two 1920s era Ross courses in the same resort operation.

Sadly the Covid-19 cloud in 2020-21 stymied some of the ideas Miller and his ownership partner had to celebrate the 100th birthday of Mid Pines in 2021. Haresh Tharani, a retail and apparel industry veteran and avid golfer, bought out the Bell family’s partner in December 2017. Some rooms at Mid Pines have been thoroughly renovated, and Miller and Tharani are evaluating a number of options for future renovation and/or expansion.

Over the ensuing years, Miller would occasionally play Southern Pines Elks Club, another Ross course from the early 1900s owned since 1951 by the Benevolent Order of Elks. He tried at various junctures to either buy, lease or have a management contract for the course, but none of those initiatives worked until he was able to acquire the course in July 2020.

“I’ve always thought it a wonderful golf course,” Miller says. “It’s one of the best routings in the area. It has great topography and a set of par-3s that are unmatched anywhere. The club has a lot of fascinating history and I think it’s perfect fit for us.”

Golf has been played on the site just south of Southern Pines town center since at least 1906, and newspaper records indicate an 18-hole Ross course was operational by 1923, with a new nine having opened in 1924. The third nine was later abandoned but the land remains and helps provide an attractive buffer for the existing course and club facility.

Immediately upon closing the deal in July 2020, Miller commissioned Franz to begin work taking Ross’s routing and tweaking it to modern agronomic and playability standards and correcting many of the problems that evolved over the years due to limited maintenance resources. Over the next 14 months, Franz and Dave Fruchte, the long-time head superintendent at Pine Needles and Mid Pines, rebuilt all the greens and bunkers, thinned out trees, recontoured fairway mowing lines and fertilized the playing surfaces. Play continued on the course though with temporary greens at various junctures, and the course officially reopened in its modern iteration in early September 2021.

“I think it’s pretty spectacular,” Miller says. “There’s probably more elevation change at Southern Pines than any course in the area. There are a lot of uphill shots and downhill shots because of the topography. They’d not done much tree-thinning for 50 or 60 years, and there was so much shade, it was hard to grow grass. It’s really exceeded my expectations. Southern Pines has always had kind of an almost cult-like following because the routing was so spectacular and always one of those hidden gems.

“I like to think it won’t be hidden anymore.”

In the highly competitive world of resort golf, the Pine Needles/Mid Pines/Southern Pines umbrella offers something no one else match—three Ross courses with every hole in the same position as the day the courses opened roughly a century ago. The holes at Mid Pines and Southern Pines have the same numbers and positions as they did in the original routings. The holes remain the same at Pine Needles, though the numbers changed under the Bells in the 1950s when they built new lodging facilities and made the original second hole the new first hole, with each hole number changing as well.

“We’ve got 54 great holes of golf, all designed by Donald Ross, with each course having its own character,” Miller says. “Someone can stay two or three nights and play three vintage golf courses with the best playing surfaces we can offer. I think it’s pretty special.”

Lee Pace is the author of “Sandhills Classics—The Stories of Pine Needles and Mid Pines,” published in 1995 and updated in 2007, and was co-author with Peggy Kirk Bell of her book, “The Gift of Golf,” published in 2001.