Pinehurst Is Back to Pioneering 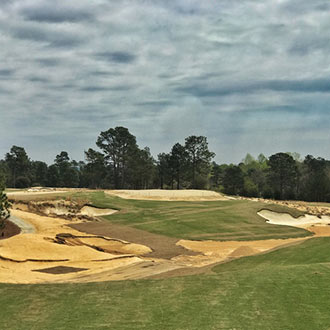 “Pinehurst absolutely was the pioneer in American golf. While golf had been played in a few places before Pinehurst was established, it was right here in these sandhills that the first great national movement in golf was started. Men came here, took a few golf lessons, bought a few clubs and went away determined to organize clubs.”
— Donald Ross

Not long ago, I was reminded that the pioneering at Pinehurst is rolling right along.

On April 11, Morning Drive was on site to showcase of The Cradle, the 789-yard par-3 course designed by Gil Hanse, which opened last October to groups of all ages, sizes, sexes and skill levels. The one common denominator: smiles.

The long and short of The Cradle: There’s variety, strategy, adventure, humps, bumps and a beverage cart they call “The Pine Cone.” There’s music in the rocks – a concert of sorts on every green – no carts, and a lot of cool little carry bags, which they loan you from the starter shed behind the first tee. The Cradle is a memory machine churning out high-fives and hugs on a conveyor belt of happiness.

So congrats to everyone involved for what has quickly become one of my favorite courses in the Sandhills of North Carolina.

Hanse came in, worked with 10 acres of prime Pinehurst real estate, rocked the assignment that became The Cradle, and has now moved on to a complete renovation of No. 4, a Donald Ross-turned-Tom Fazio design that was actually quite popular amongst avid amateurs, buddies-trippers and more importantly, Pinehurst members. Where Pinehurst No. 2 typically averages 35,000 rounds per year, No. 4 was doing somewhere around 32,000.

“When Bill (Coore) and Ben (Crenshaw) did what they did to No. 2, and those two courses sat there side-by-side, No. 4 stood out as over-manicured,” said Tom Pashley, President of Pinehurst since a few months after the Men’s and Women’s U.S. Opens in 2014.

As of mid-April, Hanse’s new No. 4 is three-quarters of the way to completion and is scheduled to reopen September 20. In order to speed up the process, they’re using some of the sod from what was on the old fairways, and repurposing it on the new ones.