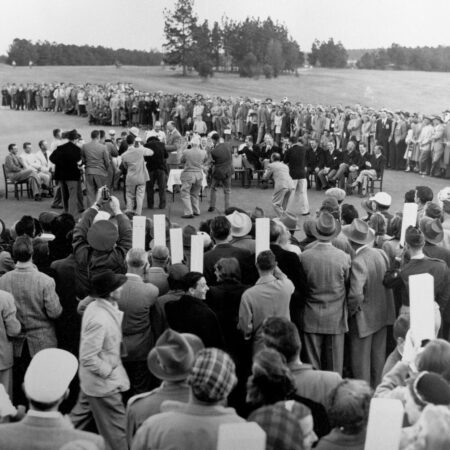 Consider the cacophony surrounding the biennial Ryder Cup matches of the last three decades — galleries swelling to 45,000, a press building with desks for 400 writers, wall-to-wall television coverage, frayed nerves and guttural rally cries and bombastic fist pumps. In that context it’s most amusing to revisit the quaint little event held at Pinehurst exactly seven decades ago.

The PGA of America brought the 1951 Ryder Cup to Pinehurst No. 2 for the ninth rendition of the event launched in 1927 and originally sponsored by English seed merchant and entrepreneur Samuel Ryder. There was a modest media delegation of some 30 correspondents, including at least three from London and three from Scotland. The Sunday attendance was in the 6,000 neighborhood, and the adjacent Pinehurst courses — Nos. 1 and 3 and the nine holes of No. 4 open at the time — were chock full of golfers at the very moment that Ben Hogan and Sam Snead were launching shots on the big course.

“It was a well-dressed, well-behaved gathering,” Golf World magazine noted.

The matches were scheduled for the first weekend in November, and the major logistical issue was finding rooms for hundreds of regular visitors during what was considered “high season” in Pinehurst. The Carolina Hotel could house 425 guests, and resort management was inundated with hundreds of inquires it couldn’t accommodate, prompting owner Richard Tufts to establish an “emergency booking agency” to locate alternative hotel rooms and private guest quarters. 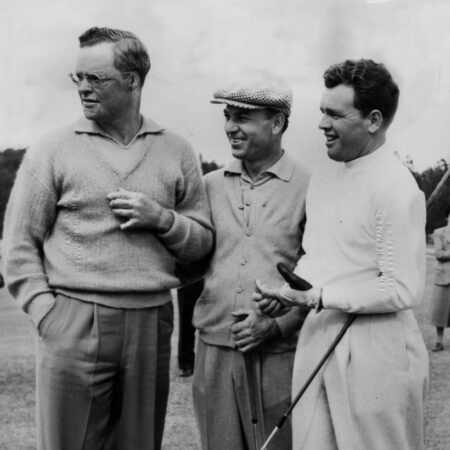 “We find ourselves in the unenviable position of having to say no to some 600 of the Carolina’s best friends … we hope they will appreciate the difficulty of our situation,” Tufts said in response to the reservations onslaught.

The British team was captained by Arthur Lacey and led by incumbent British Open champion Max Faulkner and nine-time Ryder Cup competitor Dai Rees. The golfers sailed from Southampton on Oct. 16 and had been together for two weeks practicing and, according to Rees, were “happy and confident” that they had the best chance ever of winning on American soil. The personality of Pinehurst No. 2, designed by Scotsman Donald Ross with a nod toward the great links of Caledonia, was friendly to the visitors’ eyes and psyches.

“This course is more like those we have at home than any other American course,” Rees said. “It hasn’t the subtlety of British courses and its fairways are broader. But in many respects, it is similar to those we are accustomed.” 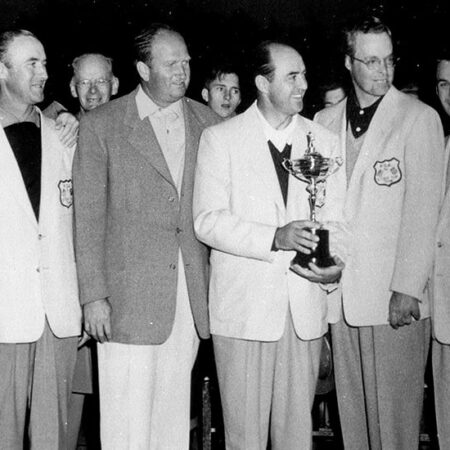 As competitions go, the event was unremarkable. The Americans barely broke stride or a sweat in winning nine matches, losing two and halving one. Foursome matches were played in cold and wind and rain on Friday, Nov. 2, with the Americans jumping to a 3-1 lead. The golfers took a day off to attend the Tennessee at North Carolina football game in Chapel Hill on Saturday (won by the Volunteers, 27-0), though only three members of the U.S. team went to the game and Snead traveled to Florence, S.C., for an exhibition. The Americans won six matches, lost one and halved one in the singles competitions on Sunday. Only two of 12 matches reached the final hole.

“America has become the senior partner, and Great Britain the junior partner,” British golf correspondent Henry Longhurst wrote. “This is it in the military, the economic and the golfing spheres of influence.” 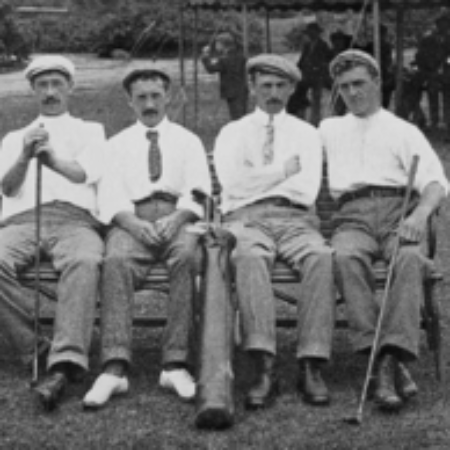 But the real story of the competition was its aftermath and the controversy that led to the demise of the North and South Open, a professional tour event held at Pinehurst since 1902 and an event considered a “major” by the golf establishment. Walter Hagen won the event, as did Horton Smith, Henry Picard, Paul Runyan, Byron Nelson and Cary Middlecoff. Hogan won his first professional event in the 1940 North and South when he was an obscure journeyman from Texas.

A rift had existed between Pinehurst management and the tour pros ever since the PGA Tournament Committee established a minimum purse of $10,000 for each event (this long before the club pros and touring pros split into individual organizations). Tufts considered the resort’s largesse of complimentary and/or steep discounts on room and board for the pros as part of their compensation and refused to boost the North and South purse to the $10,000 level. 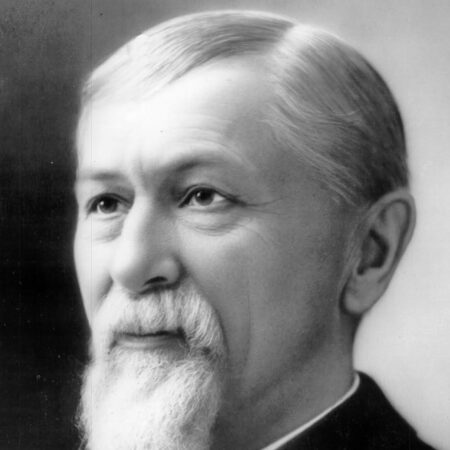 While each member of the British team remained in Pinehurst for the North and South, set to start on Wednesday, three days after the Ryder Cup conclusion, four U.S. team members bolted in an obvious snub of Tufts and, as Golf World noted, “with a fine disregard for the dictates of common courtesy.”

Snead was the defending North and South champion and entered the 1951 event and was joined by Alexander, Heafner, Oliver and Ransom. Alexander played one round but left without turning in his card. Heafner five-putted the last green and withdrew after a 77. Oliver carded a 74 in the first round but didn’t submit a card after starting play in the second round.

“Nerves were in a state of rumble and explosion,” Golf World noted.

Snead made it through one round but had had enough as round two wore on. He was playing badly and being shown up by Dick Chapman, a Pinehurst winter resident and a top amateur of the mid-20th century. Chapman was on his way to shooting a 68 and Snead a 78, and Snead couldn’t get to the clubhouse soon enough. Chapman had the honor on the 18th tee, but Snead usurped him and hit first. When the threesome that also included the Brit Max Faulkner got to the green, it was Faulkner’s turn to putt, but Snead lagged up, tapped in and walked off. That left Ransom as the only Yank left.

Tommy Bolt won that North and South Open, and the following spring, Tufts announced the event was being discontinued.

“Present-day professional golf had nothing to contribute to the development of a true golfing atmosphere at Pinehurst,” Tufts said.

Quaint had certainly run its course back in 1951.

Read about The Ryder Cup that Wasn’t — Pinehurst 2004

Lee Pace has written four books on the history of golf at Pinehurst and has covered golf in the Sandhills for more than three decades. His most recent book is “Good Walks—Rediscovering the Soul of Golf at 18 Top Carolinas Courses.” The book is available from UNC Press and read more about the Walking Culture of the Sandhills.