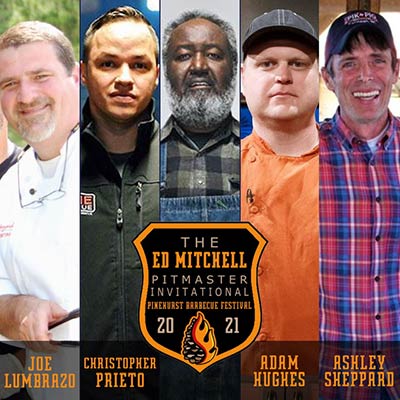 PINEHURST, NC (APRIL 30, 2021) – An all-star lineup of renowned and prestigious North Carolina pitmasters — with well over a century of combined grilling expertise — has been unveiled for the inaugural Pinehurst Barbecue Festival over Labor Day Weekend in the historic Village of Pinehurst.

Advanced tickets to the Pinehurst Barbecue Festival are available at www.pinehurstbarbecuefestival.com. This unique food festival Sept. 3-5 is expected to sell out as tickets are limited for each of the events associated with the three-day festival.

The “Ed Mitchell Pitmaster Invitational” on Sunday, Sept. 5, where patrons can sample five different BBQ meats and five Southern sides, will honor the 74-year-old Mitchell, known worldwide in barbecue circles as “The Pitmaster” for his experience cooking whole hog BBQ the traditional way since he was a teenager in Wilson.

“I’ve participated and cooked in countless food events and festivals during my career but helping launch the Pinehurst Barbecue Festival has to be one of the most exciting for me,” said the legendary pitmaster, who is opening new restaurant in Raleigh called The Preserve. “The quaint setting in the Village of Pinehurst, along with the elite group of pitmasters who have been assembled, will create a remarkable Tar Heel food experience and lasting impression for all who attend.”

Mitchell has been featured on the Food Network numerous times, as have most of the five pitmasters participating this fall. Mitchell has gone up against Iron Chef Bobby Flay in a rib throw down and won. He has been featured in The New Yorker and Gourmet magazines, as well as dozens of other publications and BBQ blogs. Mitchell, currently a judge on the Food Network’s Moonshiner Barbecue series, will feature whole hog BBQ at the Pinehurst Barbecue Festival.

Prieto, who owns Prime Barbecue in Knightdale, is known as #BarbecueNerd. Prieto appeared on the Food Network’s Chopped Grill Masters in 2018 along with Hughes, The Cooking Channel’s Man Fire Food and is the author of Southern Living magazine’s The Ultimate Book of BBQ. Prieto will feature beef brisket at the Pinehurst Barbecue Festival.

Hughes, the owner of Old Colony Smokehouse in Edenton, will compete in the prestigious 2021 World Food Championships this November. Three years ago, Hughes advanced to the grand finale of the “Chopped: Grill Masters” competition. Hughes has been a nationally ranked competitive barbecue pitmaster, winning several Grand Championships along with numerous other awards from Florida to Pennsylvania and everywhere in between, including a World Championship in ribs. Hughes will feature ribs at the Pinehurst Barbecue Festival.

Lumbrazo is co-owner of Backyard Bistro in Raleigh, which was featured on an episode of Epic BBQ Pits on the Destination America Cable Network. Backyard Bistro’s grilling operation features a 38-foot “Big Rig,” which will be on hand for the Pinehurst Barbecue Festival. The massive “Big Rig” displays four 3-by-5 feet grills (large enough to cook a whole 125-pound pig each), two cast-iron burners, two 35-pound fryers, a homemade hush puppy maker and six 40-pound LP gas tanks. Lumbrazo will grill sausage at the Pinehurst Barbecue Festival.

Sheppard, who is owner of Pik-N-Pig restaurant, was inducted into the North Carolina Barbecue Society Wall of Fame in 2019. What started as a venture on the side of the road in Carthage in a “log cabin” trailer, quickly grew into an airport barbecue location that attracts local military brass and many others. Since opening the Pik-N-Pig in 2007, Sheppard has been featured in Food Paradise on The Travel Channel, Fun Places to Fly and more. Sheppard will barbecue poultry at the Pinehurst Barbecue Festival.

In addition the main headliner event – the Ed Mitchell Pitmaster Invitational on Sunday, Sept. 5 – the three-day Pinehurst Barbecue Festival will include a Celebration Concert on Friday night, Sept. 3, along with “Q” School Grilling Classes, Demos & Food Sampling, a Bourbon and Bites tasting event and VIP “Meet the “Masters” reception on Saturday, Sept. 4. Tickets can be purchased to each event separately, or a “Whole Hog” ticket package can be purchased to include all Pinehurst Barbecue Festival events, including the exclusive VIP “Meet The Masters” reception.

Prieto and Lumbrazo will be conducting the unique “Q” School Grilling Classes, Demos & Food Sampling event at the Pinehurst Brewing Co. on Sept. 4.

About Tarheel Festivals:
Tarheel Festivals, LLC. is a full-service event management and production company headquartered in Pinehurst. With over 35 years of producing signature events, their team of professionals build event experiences from inspiration to integration.

The official event partner for the Pinehurst- Southern Pines-Aberdeen Area Convention & Visitors Bureau (CVB), Tarheel Festivals, LLC will also stage the third annual Festival D’Avion (www.festivaldavion.com) – A Celebration of Freedom and Flight — at the Moore Country Airport on Oct. 29-30, 2021. Tickets to that event, which honors the men and women that serve our military, in addition to highlighting vintage aircraft and all things aviation, are also available on www.ticketmesandhills.com.