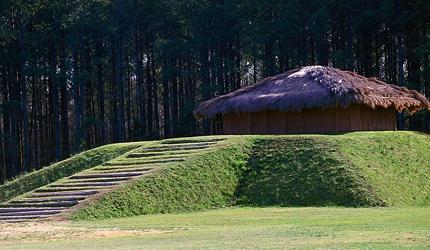 For more than a thousand years, Indians lived an agricultural life on the lands that became known as North Carolina. About the 11th century A.D., a new cultural tradition emerged in the Pee Dee River Valley. That new culture, called ‘’Pee Dee’’ by archaeologists, was part of a widespread tradition known as ‘’South Appalachian Mississippian.’’ Throughout Georgia, South Carolina, eastern Tennessee, western North Carolina, and the southern North Carolina Piedmont, the new culture gave rise to complex societies. These inhabitants built earthen mounds for their spiritual and political leaders, engaged in widespread trade, supported craft specialists, and celebrated a new kind of religion. Town Creek, situated on Little River (a tributary of the Great Pee Dee in central North Carolina), has been the focus of a consistent program of archaeological research under one director for more than half a century.