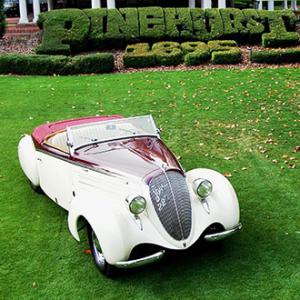 The 2013 and 2016 Best of Show winners of the Pinehurst Concours d’Elegance – two of the rarest vintage automobiles in the world – will return as display vehicles for patrons to enjoy at this year’s collector car showcase Saturday, May 6 at Pinehurst Resort.

The return of the 1938 Steyr 220 Glaser Roadster, the event’s inaugural winner, and the 1928 Isotta Fraschini, last year’s champion, will help celebrate the 5th anniversary of the Pinehurst Concours on the fairways of the iconic golf resort. Both cars are owned by Peter Boyle of Oil City, Pa.

“The Isotta Fraschini is rolling elegance and the Steyr is rolling sport,” Boyle said. “Each car has magnificent items of interest, including the Ostrich interior in the IF and fitted luggage in the Steyr. And both cars are like a book that when you are studying them you will always find new things that interest you.”

“Seeing these cars shown together is a special treat,” said Roger James of D&D Classic Automobile Restoration, who restored both vehicles. “They represent two decades of magnificent styling and design – the 1920’s and the ‘30’s – and the best of European classics.”

Tickets to the fifth annual vintage car showcase can be purchased online at www.pinehurstconcours.com and at four local ticket outlets in the Village of Pinehurst and Southern Pines. Tickets to this year’s Pinehurst Concours, which includes a live performance by award-winning country artist Sara Evans, are $40 in advance and $50 beginning Monday, April 17 through the day of the event.

The uniqueness of these two automobiles is important in automobile history.

The Isotta Fraschini, originally purchased by aviation pioneer Harry Williams and Marguerite Clark, is one of two produced in 1928, being sent to the United States and bodied by the coachbuilder Lebaron. It is believed that the car returning to Pinehurst was the first boattail built by Lebaron and was shown at the New York Auto Show.

Meanwhile, the Steyr was one of six two-seat roadsters bodied by the coachbuilder Glaser in Germany. Three of the six cars were destroyed during World War II, one was lost, one is in a Museum in Europe and the only privately owned surviving example will be displayed at Pinehurst. The streamline styling and four-wheel independent suspension made the car perfect for touring, and it was sent to Berlin in 1938 as a factory demonstrator.

“The Isotta Fraschini is considered to be Italy’s Rolls-Royce equivalent,” said Pinehurst Concours chief judge Nigel Matthews. “It is just beautifully proportioned and the Steyr is just extremely, extremely rare.”

Sara Evans, whose distinctive voice and edgy contemporary sensibility have helped sell more than six million records and produce five No. 1 hits, will perform a live concert following the presentation of the Best of Show. The concert continues a Pinehurst Concours tradition that has included concerts by Three Dog Night (2015) and The Commodores (2016).