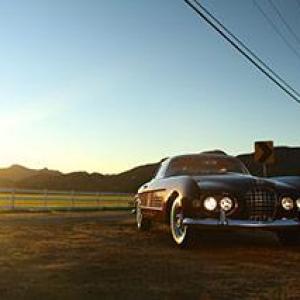 A rare Cadillac once owned by 1940s Silver Screen starlet Rita Hayworth will be one of several iconic automobiles of note displayed for patrons attending the 2015 Pinehurst Concours d’Elegance on Saturday, May 2 at Pinehurst Resort.

The 1953 Cadillac coupe Series 62 with bodywork by Ghia is one of only two ever made — and has a star-studded history. The world’s wealthiest man at the time — Prince Aly Khan — gave this Cadillac with Ghia coachwork as a gift to the famed actress, to whom he was married briefly.

During the mid-1950s it was still possible to order a bare chassis from an automobile manufacturer and have it sent to a coachbuilder for a custom body to be built and fitted. The 1953 Cadillac is such a car, according to Leslie Kendall, chief curator of the Petersen Automotive Museum in Los Angeles, where the car is part of the museum’s permanent collection.

“Back in the 1950s the car was indeed special but was meant to be used,” Kendall said. “You wouldn’t spend the amount of money on a car that Aly Khan did and not want the person to whom you gave it to drive it around.

“It’s appropriate that the Italian coachwork ended up on such a practical American car,” added Kendall. “You have a very reliable American car with an engine and drive train that could be serviced at any gas station clothed in incredibly voluptuous coachwork. It is the best of both worlds. Because of its prominence, its beauty, its rarity, its condition and its public appeal we also like taking the Ghia Cadillac out.”

The Rita Hayworth car making the cross country trip from California to North Carolina continues a tradition started at the 2014 Pinehurst Concours in which a rare 1956 Jaguar XKSS owned by movie legend Steve McQueen was displayed for patrons to enjoy.

“We believe staging such autos of note above and beyond our 12 judged classes accentuates the overall experience and ticket value to our annual collector showcase,” said Pinehurst Concours president Jay Howard. “Such cars rarely make an appearance on the East Coast, and this 1953 Cadillac is indeed unique, a part of American history and a must see for our patrons.”

The Petersen Automotive Museum is widely regarded as having one of the best collections of rolling sculptures in the world. In addition to the 150 vehicles in the regular public display area, a similar number of vehicles are housed downstairs in the museum’s vault. The iconic museum is currently shuttered as it swiftly moves through nearly $125 million in massive renovations. Plans are to reopen at the end of this year.

The third annual Pinehurst Concours collector car showcase features some of the world’s finest original and restored vintage cars. Twelve classes are judged and battle for Best in Show with up to 300 cars and motorcycles to be on display. At approximately 5 p.m., Three Dog Night will take center stage on the fairways of Pinehurst Resort in an unprecedented concert setting.

Advance tickets to the third annual Pinehurst Concours on May 2 are just $25 online at www.pinehurstconcours.com. Four additional ticket outlets are scattered across Pinehurst and Southern Pines. The day’s ticket includes entry into the Pinehurst Concours AND the Three Dog Night concert.

Proceeds from this year’s Pinehurst Concours will benefit the USO of North Carolina, continuing the event’s strong military connection.