Sneak Peek From The Field Of The 2017 Pinehurst Concours 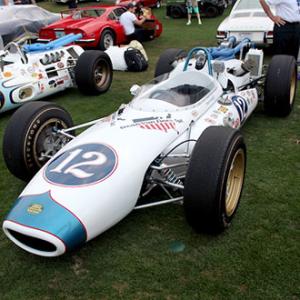 VILLAGE OF PINEHURST, N.C. (April 12, 2017) – Ray Evernham’s freshly restored Brawner Hawk, a significant piece of racing history, that Mario Andretti drove to the 1965 USAC National Championship and Rookie of the Year honors will be staged at the 2017 Pinehurst Concours d’Elegance and judged in the Race Cars Class.

The Brawner Hawk was recently restored by one of the car’s original mechanics, Jim McGee, using 85 percent of its original parts, including one of the engines that was in rotation during Andretti’s stint with the car.

While Andretti was already a familiar name in the sprint car circuits, the Brawner Hawk helped launch the Andretti legend in the USAC Champ Car series. The Champ Car series went on to become the CART series in 1978 with Andretti still active as a dominant driver.

Starting with the Brawner Hawk in 1965, Andretti became one of the most successful drivers in the history of the sport. He is only one of two drivers to win races in Formula One, IndyCar, World Sportcar Championship and NASCAR.

Evernham is a former racing crew chief for Bill Davis Racing and Hendrick Motorsports, owner of his own team Evernham Motorsports from 2001–2007, and analyst for ESPN’s NASCAR coverage and, currently, host of AmeriCarna on Velocity. He is a three-time Winston Cup Series champion crew chief with driver Jeff Gordon.

Tickets to the fifth anniversary of the Pinehurst Concours on Saturday, May 6 at iconic Pinehurst Resort can be purchased at www.pinehurstconcours.com. Award-winning country music singer Sara Evans will perform a live concert on the show field following the crowning of the Best of Show.