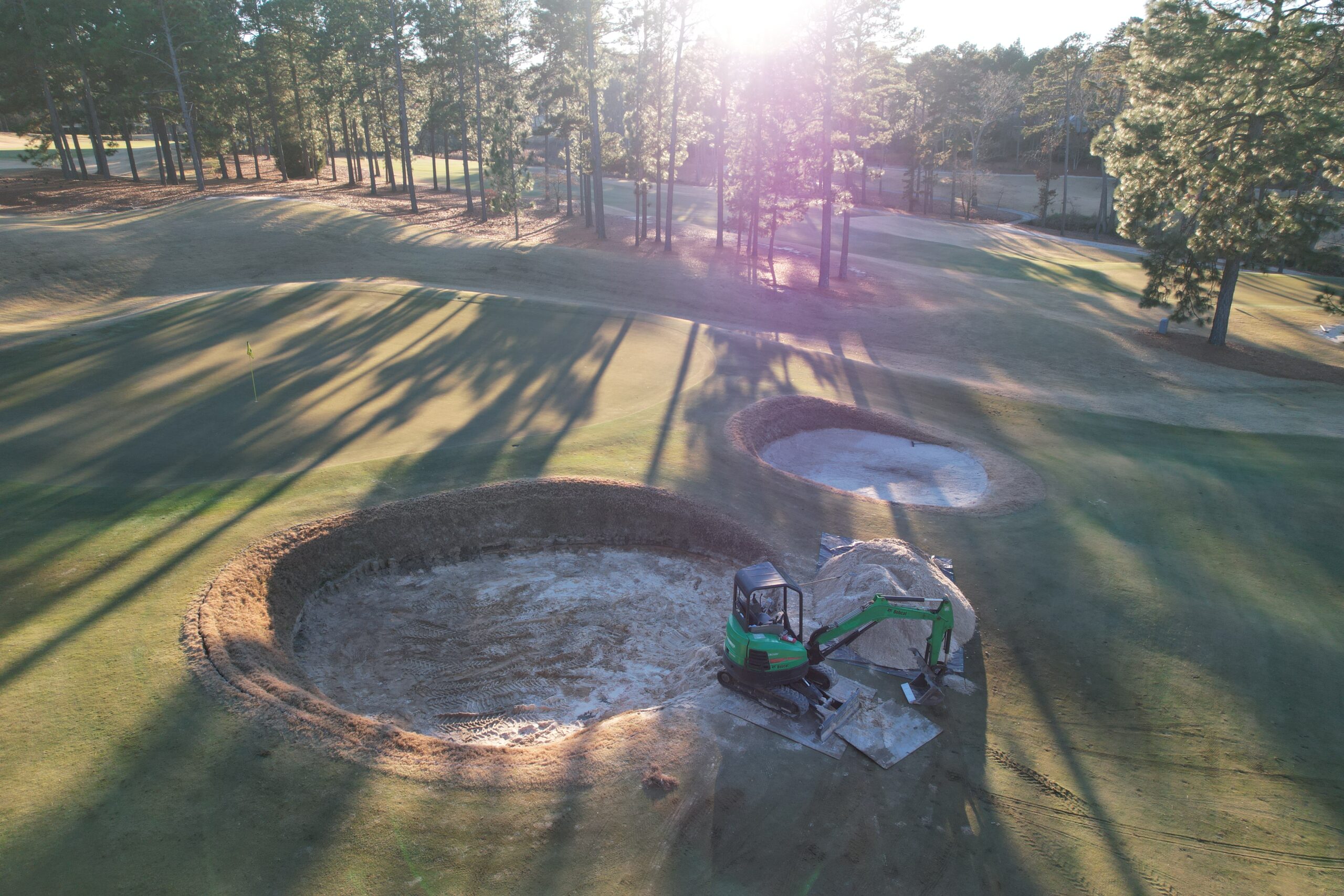 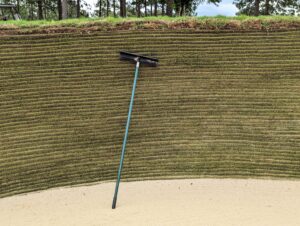 Ten sod wall bunkers at Talamore on holes 2, 5, 9, 15, and 17 are now lined with tiles that are layered and precision angled. While some of the bunkers stand as tall as 7 feet, they will not require as much maintenance. “As a bonus, they’re beautiful like the bunkers you see over in the British Isles during the Open Championship,” said Talamore GM Matt Hausser. “Plus, they’ll last for decades.”

“It’s something different, especially here around Pinehurst that golfers don’t see when they’re in town,” Hausser said. “It’s a different look. It’s clean. It’s a very neat experience. Some people might think they’re a little daunting, but I think it’s going to be something cool that golfers will talk about. It’s one of those things where you hit into a couple of the big ones and you get out or you get up and down. It gives them something else to talk about afterwards.”

In more than a quarter century since the Talamore Resort first debuted — offering llamas as caddies — the popular Sandhills golf getaway has remained on the cutting edge of resort innovation. Talamore was named the “Course of the Year” by the Village of Pinehurst Area Chapter of the National Golf Course Owners Association (NGCOA) after a major restoration was performed on the golf course in 2016. In Golf Advisor’s annual Golfers’ Choice rankings of the best golf courses in the United States, Talamore was named the No. 1 public golf course in North Carolina and No. 22 in the “Top 25 U.S. golf courses for course conditions.”

The addition of the EcoBunkers at Talamore is part of an on-going, multi-million-dollar resort enhancement that also includes the addition of a Toptracer Range at Talamore and a large new practice putting green.

The origins of the EcoBunker edging system date back to late 2006 at Radyr Golf Club in Cardiff, South Wales, a golf course that was designed by the legendary architect Harry S Colt. Club member Richard Allen, a civil engineer and golf course design enthusiast, discovered that the extensive bunker work was being performed primarily because the bunker edges were vulnerable to erosion. In addition, the ongoing repair costs were becoming unacceptable to the club’s treasurer.

Bunkers generally occupy less than 3% of the total area of a golf course, but often require as much as 25% or more of a superintendent’s available resources to maintain. This is especially true with revetted edge or sod-wall bunkers. it is not unusual for golf courses to spend tens and sometimes hundreds of thousands of dollars on bunker maintenance.

Allen undertook extensive research to find an alternative method for constructing bunker edges, but found to his surprise that there were no viable products available in the marketplace. The only option appeared to be uncovering a new system to address the market gap.

The solution presented itself to Allen in an unexpected manner. One dark night, he returned to his car at the club and turned on the headlights ready to drive home. The beam shone directly onto the ends of some rolls of waste artificial grass carpet — commonly known as Astroturf — that had been temporarily stored in the club parking lot.

Allen noticed that the reflection off the rolls closely resembled the look of revetted bunker edges, a common Scottish golf feature. Through his engineering work, Allen was familiar with the hard-wearing nature of artificial grass.

“Over the next few weeks, I did some research,” he said. “I knew that there was a lot of this waste Astroturf being dumped at great cost into landfill. I found out that the material was not bio-degradable, making it highly resilient and durable. I sketched a few designs, then considered my next action.” His resulting invention was ultimately granted patent protection. 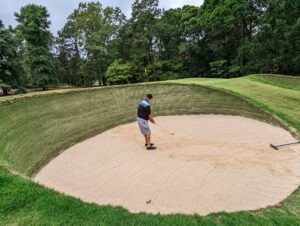 The system used at Talamore, as well as numerous clubs throughout 40 countries around the world, is a wall constructed on multiple layers of stacked artificial grass tiles. The EcoBunker edge design provides a permanently safe resilient edge, significantly reduces sand contamination from bunker sides, prevents damage and eliminates the time-consuming greenkeeping practice of bunker edging.

In 2014, Allen formed EcoBunker Ltd to promote and distribute a range of innovative, sustainable and low maintenance solutions for the golf and landscaping sectors. In the time since, the company has experienced strong growth. “It’s often said that necessity is the mother of invention,” Allen said. “The construction method I’ve now branded as EcoBunker is no different, stemming from a need to reduce the onerous burden of golf bunker maintenance.”

News about the EcoBunker system soon reached the U.S. and the Welsh-based company recognized that there was a demand for Scottish style bunkers, particularly in southeastern states such as Florida, Georgia and the Carolinas. The semi tropical climates in these areas are more extreme, and the heavy rain and high winds associated with hurricanes and tornados can cause significant stresses on bunker walls.

Responding to this, Allen came up with his second invention, the EcoBunker Advanced system, which uses specialist civil engineered soil stabilization techniques to deliver added strength to the synthetic tile walls. To date, no EcoBunkers have been damaged anywhere in the U.S., despite being hit by the massive hurricanes Matthew (2016) and Irma (2017).

This is the technique used at Talamore Golf Resort, where the technology was expertly demonstrated by EcoBunker’s U.S.-based business manager, Jay Morgan. “When engineered and implemented with our proven construction methodology, EcoBunker systems will mitigate these maintenance challenges with a life expectancy of at least 20 years,” Morgan said. “The system is warrantied for 20 years.”

“We looked at ones they have done in South Carolina and down in Florida,” Hausser said. “That’s why we ended up going with the EcoBunker. The bunkers are stronger than the sea wall. Hurricanes have hit them and hasn’t moved anything.” 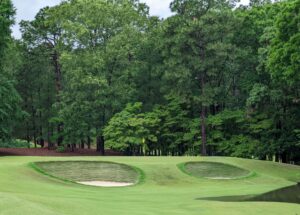 Globally renowned golf course architect Donald Steel calls EcoBunker “pioneers in the field.” Another of today’s greatest architects, Tom Doak, says, “One of the benefits is that, from an architect’s perspective, I can ’lock-in’ my design with EcoBunker.” Other golf legends such as Pete Dye, Nicklaus Design, Greg Norman, Nick Faldo, Bobby Weed, Butch Harmon and Bruce Devlin have incorporated EcoBunker into their designs.

The intent of the Talamore Golf Resort project was to rebuild select sod wall bunkers that were problematic from a maintenance standpoint. The extra work required a disproportionate allocation of maintenance resources, which could be better spent on other projects.

Prior to construction of each EcoBunker, meetings were held with Talamore golf course superintendent David Walsh and his assistant, Scott St. Louis, to discuss their desired outcome with regard to surface water management. Particular attention was paid to sculpting the tops and sides of EcoBunker to redirect and manage sheet flow.

When the resort owner of the golf course and Hausser visited the first bunker on No. 17 reconstructed with EcoBunker, they said they were captivated with the structural integrity and clean aesthetics. Hausser called EcoBunker “transformative”.

And what will the resort’s many golfers think when they first experience the new EcoBunkers?

“They’re going to notice that they want to miss them,” Hausser said.

The installation of the stylish new EcoBunkers is one of numerous projects being completed at Talamore Golf Resort. A Toptracer Range with 10 hitting stalls will open this spring, when Talamore guests will be able to experience interactive golf entertainment powered by the same technology that viewers enjoy during televised PGA Tour events to track the shots of the game’s best players. Guests can compete against friends, play a virtual round at some of the world’s top courses and receive instant shot feedback on interactive game screens. The technology uses high speed cameras, coupled with sophisticated computer algorithms, to provide instantaneous ball tracking information to guests using the range.

In addition, the Talamore practice range has been upgraded and a new, 15,000-square-foot putting course is being installed between the driving range and the 10th tee boxes that is expected to open in the fall. Guests can warm up or practice on the putting course while waiting for Toptracer, or simply settling some bets after their round.

Widely considered one of the Southeast’s most guest-friendly getaways, Talamore Golf Resort continues to evolve and improve. For an innovative, quality stay-and-play experience and value around “The Home of American Golf,” Talamore Golf Resort sets the pace and keeps getting better. The resort’s long-term roster of alumni says it all – many guests have been staying and playing at Talamore for decades. “We have so much repeat business, so for them to keep coming back and finding something else here,” Hausser said. “It’s just nice to give people something more to enjoy.”

Talmamore and MidSouth: A History of Their Own