It made for a great story in the heady days of the late-1980s golf boom: Arnie and Jack battling it out once again, staking their immense abilities and reputations face-to-face as they’d done so many times at places like Augusta and Pebble Beach and Oakmont. Only this battle wasn’t with their drivers and putters and steely determination to hole 12-footers for birdie. This was about golf-course design.

Side-by-side on Midland Road between Pinehurst and Southern Pines, developers in the mid-1980s had seized on the hot concept of the day: High-profile designer, upscale club, private gate. Projects of this nature were sprouting throughout the Carolinas, the Southeast and the Sunbelt as developers and investors sought to cash in on the convergence of the maturing baby-boomer and the explosion of golf popularity. 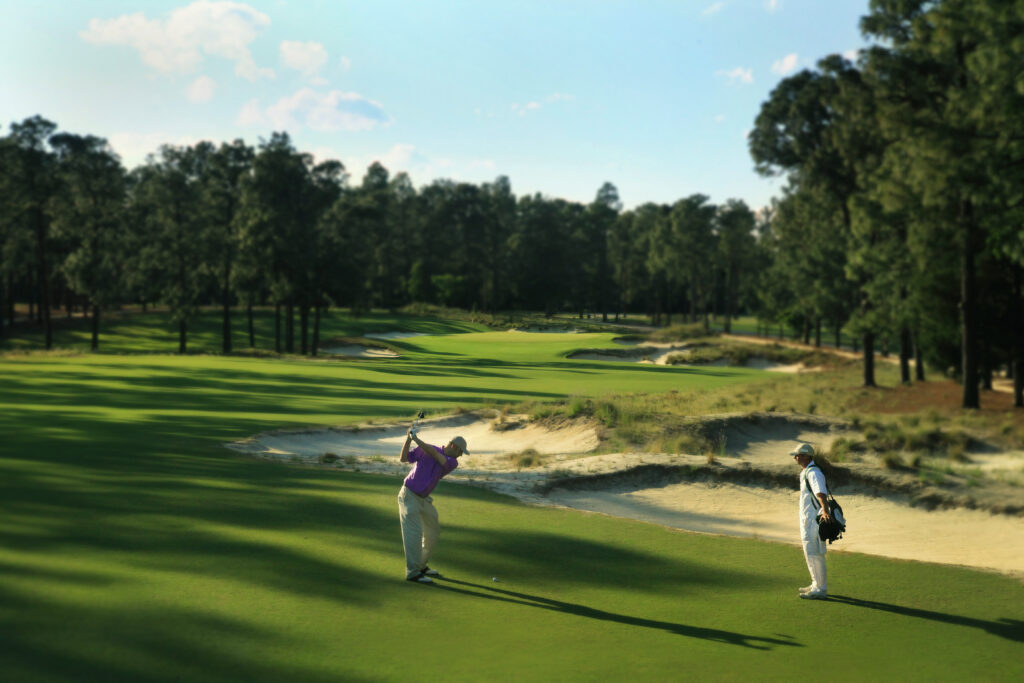 “Pinehurst No. 2 was always my favorite golf course from a design standpoint,” Nicklaus said when his course opened in the spring of 1989. “To come to Pinehurst and build a course within a stone’s throw of No. 2 is special. This is the least amount of dirt we’ve ever moved. It’s one of the most natural looking courses we’ve ever done.”

Next door, Ed Seay was in charge of the Palmer Design operation, and the umbilical cord from Seay to the beginnings of golf in Pinehurst was intriguing. Seay, a native of Jacksonville, Fla., had started his design career in the 1960s living in the Sandhills and working for Ellis Maples, the son of longtime Pinehurst green superintendent and construction manager Frank Maples, who worked alongside Donald Ross in the early 1900s building and maintaining four courses at Pinehurst.

“This is a dynamite golf course,” Seay said. “It’s everything a golfer could want. It’s one of the best we’ve done. Every hole nestles right in. From one hole to the next, you do not find a similar piece of ground. The variation in contour is remarkable for an area thought to flat. That’s one of the charms of this golf course.”

Both courses were not without their ownership travails, though, as the Gulf War and an early 1990s recession crimped the real estate market. In time, though, both have landed on solid ownership platforms, with the Nicklaus course now known as Pinehurst No. 9 and part of the Pinehurst Resort family, and the Palmer course now known as Mid South owned for nearly two decades by Pennsylvania businessman Robert Levy Jr., who also owns Talamore and Talamore Golf Resort. Both are open to the traveling golf public.

Nicklaus and design associate Jim Lipe moved only 185,000 cubic yards of earth in building their course — a very modest number by the 1980s standards, which had designers routinely moving mountains of dirt. It’s relatively forgiving off the tee but is exceedingly demanding around the greens. Multiple levels make putting a challenge, and missing a green requires a svelte touch to get up-and-down for par. 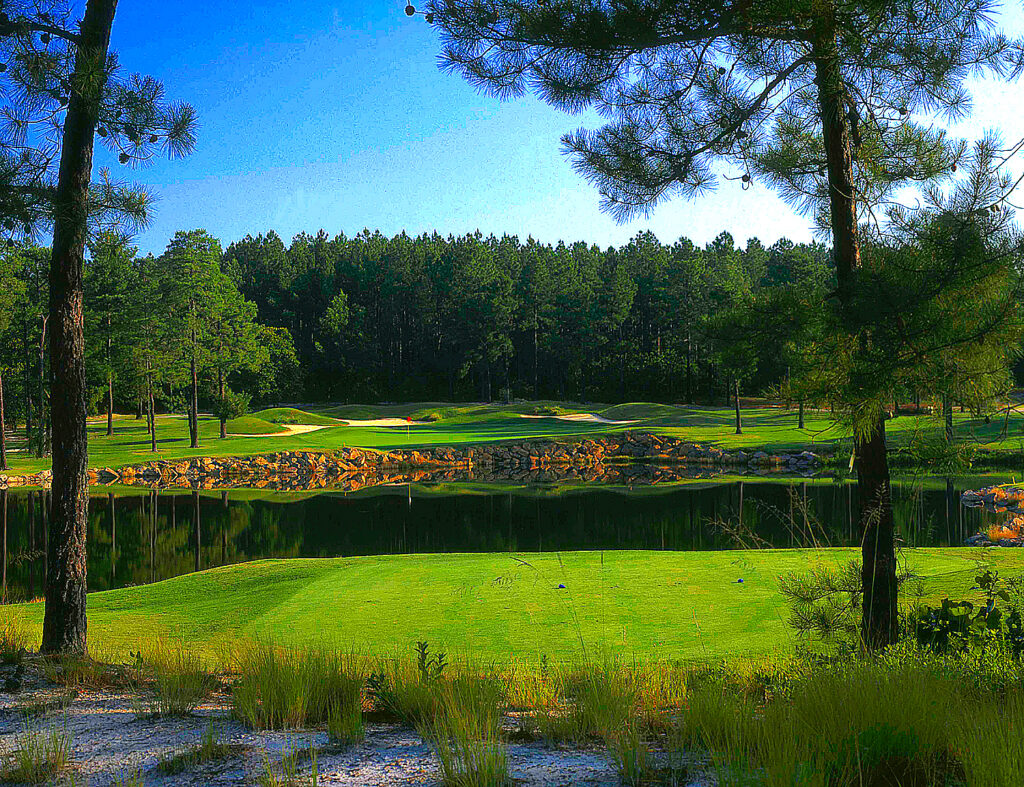 The Mid South course winds through the pines on land with plenty of pitch and roll. There are a half-dozen lakes on the property, providing for outstanding visuals and a good mix of golfing challenge without taking on an extreme penal character. The signature feature of the course is the double-green complex that serves the par-five ninth hole and the par-four 18th. A lake sits between the holes, with nine running right-to-left around the green and 18 turning left-to-right. There’s a safe approach on both holes and a more aggressive line as well. 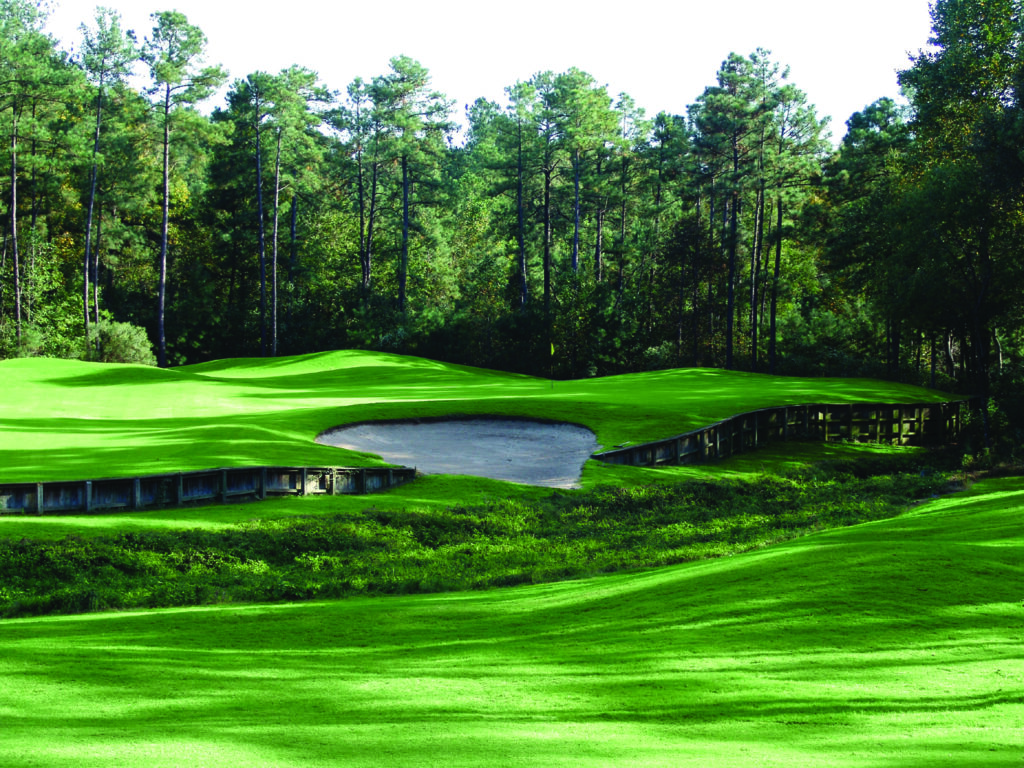 The third member of “Golf’s Big Three,” the so-called triumvirate credited with popularizing and commercializing the sport in the 1960s, has a presence as well.  Gary Player designed the Holly Course at Pinewild Country Club that opened in 1996 as a companion course to the Gene Hamm-designed Magnolia Course. The Holly Course hopscotches wetlands, streams and ponds to some degree on roughly half its holes.

Player, the fiercely competitive golfer from South Africa, brought the same fires to his design challenge at Pinewild that he wielded decades earlier on Pinehurst No. 2 while competing against Nicklaus and Palmer in the old World Open.

“I like the challenge,” Player said of coming to a golf-rich area and staking his claim. “I like for people to go to an area and say, ‘Which course did you enjoy the most?’ The thing they should do is run a little contest, have people vote on their favorite. I love the competition.

“To come to Pinehurst and build a golf course is a wonderful opportunity. Playability is the thing with this golf course. As great as Pinehurst No. 2 is, it can be too tough for some golfers. They hit a good shot and it rolls off the edge and into one of those little swales.”

The courses at Pinewild are accessible to the traveling golfer as well through various package operators, making “The Big Three” alive and well in the Sandhills golf travel community.