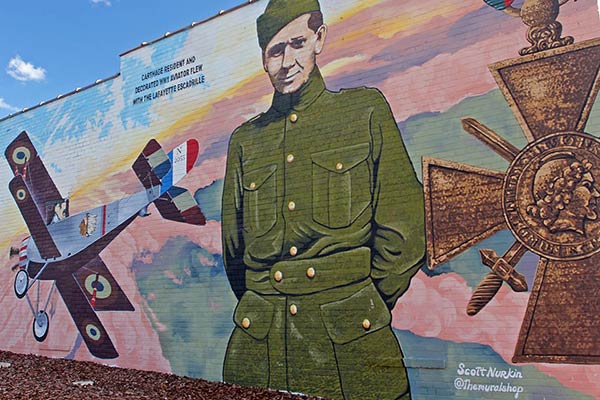 The members of the Carthage Mural Committee had a vision – visitors strolling the streets of downtown Carthage, NC exploring the town in their search for more murals. The Committee selected artist Scott Nurkin from Chapel Hill from among a dozen people who applied to paint the first mural and thus The Carthage Mural Project began.

Three murals, all by Scott Nurkin, are now completed. More murals are in the planning stages. 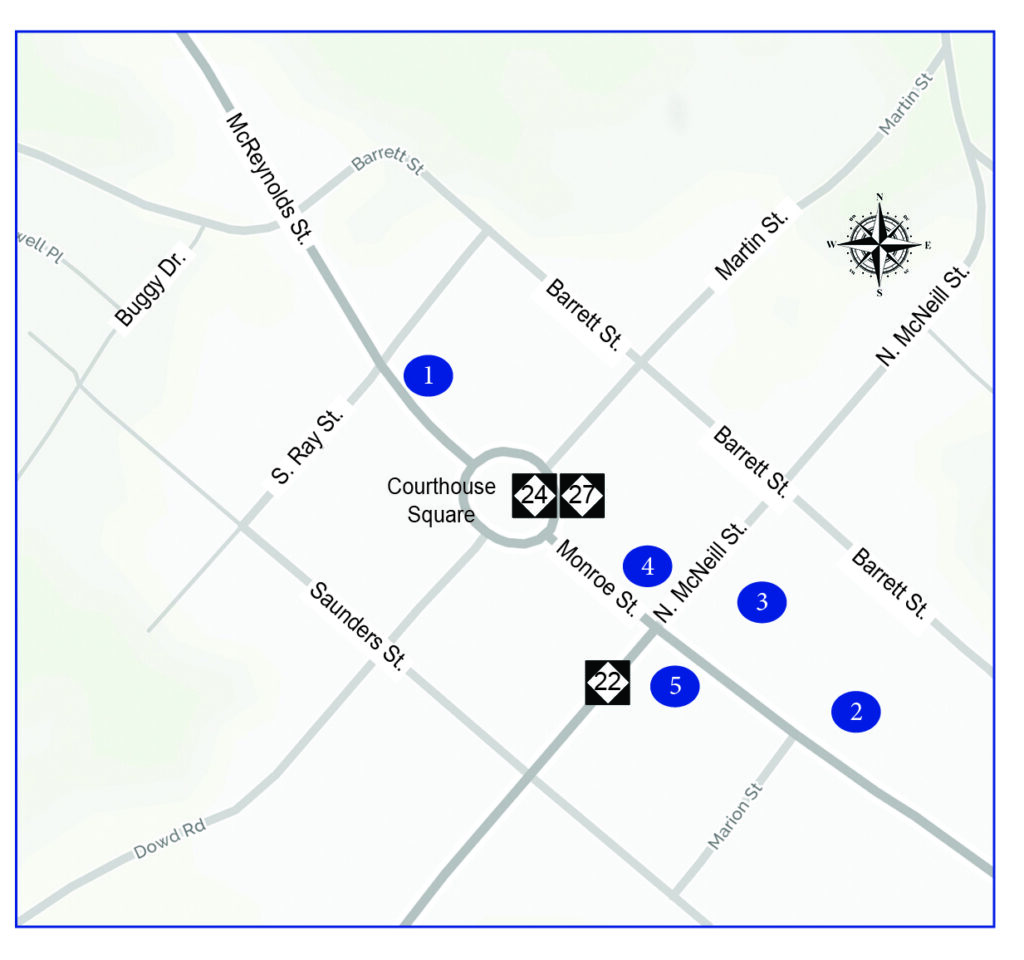 Carthage is proud to have been the home of the Tyson & Jones Buggy Company (1850-1929), at one time the largest carriage manufacturing factory in the South. In 1890, its most prosperous year, the factory produced 3,000 buggies and had more than 100 employees. The popularity of the automobile led to the demise of the company in 1925. The town hosts the Carthage Buggy Festival in May each year to celebrate the former Carthage business. Located at 104 McReynolds Street, Carthage.

James Rogers McConnell grew up in Carthage, N.C. and flew for France in the Lafayette Escadrille during World War I before the United States joined the war. An adventurous spirit, he said, “These sand hills will be here forever, but the war won’t; and so, I’m going.” The 30-year-old pilot was killed in action during aerial combat with two German planes, shot down above the Somme battlefields. McConnell is buried in a meadow between the villages of Flavy-le-Martel and Jussy in Aisne, France. In March 2018, the Town of Carthage signed a declaration becoming the official sister city to the French village of Flavy-le-Martel. Located at 205 Monroe Street, Carthage.

The Third Mural – When Tobacco Was King

Tobacco and tobacco growers put North Carolina on the map during the 1900’s. The Town of Carthage was surrounded by tobacco farms, thanks to the climate and sandy soil that suited the crop. Farming tobacco as a cash crop supported the families who supported the town. It was hard, honest work, where neighbors helped neighbors, and everyone worked together. Tobacco farms provided summer jobs for many town kids growing up. Located at at 104 N. McNeill Street, Carthage.

Scott Nurkin graduated with a BFA degree in painting and drawing from the University of North Carolina at Chapel Hill. After college, he began a 3-year apprenticeship with master-muralist Michael Brown at Brown Fine Art Studios in Carrboro, NC.

In 2004, Nurkin founded The Mural Shop, a Chapel Hill-based company that allows him to design, paint and restore large-scale illustrations around the state. He has created hundreds of murals and illustrations for a broad clientele ranging from homeowners to professional sports teams.

There are several more murals by various artists in Moore County. Click Here for a guide to them all.