The Clay It Is 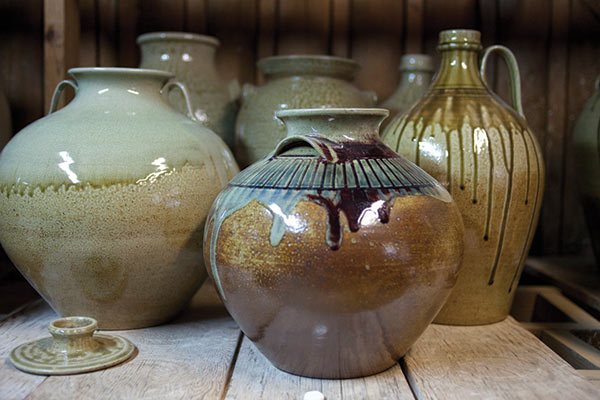 Take a spin through North Carolina’s historic pottery country, where generations of families still practice the craft of their ancestors.

A two-lane stretch of blacktop called NC Hwy. 705 passes houses, farms and fields on its way from NC Hwy. 211 in Moore County, where it begins, to Interstate 73/74 in Randolph County, where it becomes Little River Road. The road also passes near approximately 100 potteries. Thus, it is known as the “Pottery Highway.”

About 40 miles northwest of the Village of Pinehurst, the highway cuts through the tiny community of Seagrove. State legislators have designated the Seagrove area—which includes portions of Randolph, Moore, Chatham and Montgomery counties—as “the state birthplace of traditional pottery.” One local potter has called Seagrove “the pottery mecca of the United States.” Visitors from all over the world come here to buy pottery, see how it’s made and, oftentimes, chat with the artisans in their studios and workshops. So it’s easy to see why it’s a popular day trip for visitors to the Pinehurst, Southern Pines,  Aberdeen Area.

Among the Seagrove area’s early settlers some 250 years ago were potters from Staffordshire, England, famed for its porcelain and fine china. These farmers made pottery for extra income using the high-quality clay found in the soil, producing things necessary for housekeeping: colanders, baking dishes, plates, candlesticks, washbowls and the like. Later, the growing whiskey industry required a steady supply of jugs. The Plank Road passing through town, and eventually the railroad, helped put Seagrove pottery on the map, at least for a while.

The 20th century brought Prohibition, drying up—literally—the market for whiskey jugs; it also brought cheap containers and kitchenware of metal and glass, rendering clay items less desirable, and commercial dairies and refrigerators reduced the demand for milk crocks and butter churns. In the early 1970s, only six potteries were operating in the Seagrove area.

The potter population has grown dramatically since then, fueled in part by graduates of a production pottery program at nearby Montgomery Community College as well as a resurgent interest in traditional crafts. Whether you have a few hours, a day or a week, you can fill it with magic along the Pottery Highway—the magic of watching talented hands transform wet clay into a world of objects that are useful or decorative, or both.

Begin the journey at the North Carolina Pottery Center in downtown Seagrove. With more than 800 pieces of pottery, artifacts and photographs, the Center traces pottery making from Native Americans to today, including samples from area pottery shops.

Then, just head out on the Pottery Highway—be sure to take time as well to explore the nearby Busbee and Jugtown roads—and stop wherever the spirit moves you to stop. Clay treasure lies behind every shop door.

Visit our shopping page for a list of potters in Moore County.