Top 10 Spots for a #SandhillsSelfie

Boasting an abundance of picturesque spaces and memorable places, Moore County — including the Southern Pines, Pinehurst, and Aberdeen communities, and other quaint, surrounding towns — serves up plenty of opportunities for a #SandhillsSelfie. In 1996, Pinehurst was designated a National Historic Landmark by the U.S. Department of the Interior, a designation that includes the entire historic district of the Village of Pinehurst, including the country club and five golf courses. Perfectly complementing our centerpiece are countless other special sights stretched far and wide throughout the North Carolina Sandhills.

So, without further ado and in no particular order, here are our Top 10 favorite places to snap a #SandhillsSelfie: 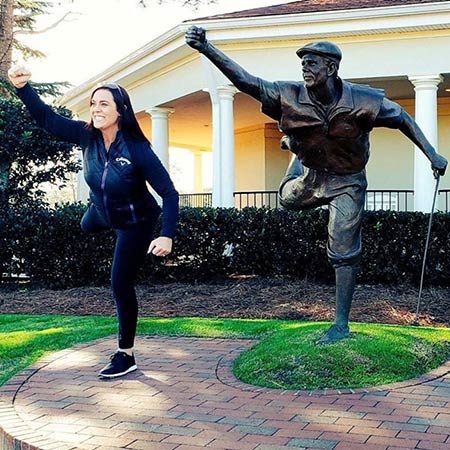 Payne Stewart Statue at Pinehurst No. 2

There may be no more iconic image from the game of golf than Payne Stewart’s celebratory fist-pump pose after capturing the 1999 U.S. Open at Pinehurst No. 2, which is forever memorialized with his statue perched just off the course’s 18th green. Stewart’s likeness is a staple at the resort, a place for Pinehurst Resort guests and members to take photos and relive history. Later serving as the home of back-to-back U.S. Opens in 2014, Pinehurst Resort has hosted more single golf championships than anywhere else in America. With the USGA constructing its “Golf House Pinehurst” and further solidifying a special bond, that number will continue to grow for decades to come. 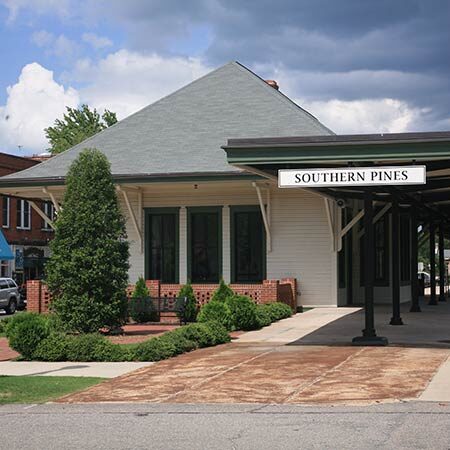 The wooden Southern Pines depot was constructed in 1898 for the Raleigh and Augusta Railroad, which was later absorbed into the Seaboard Air Line Railway (SAL). The SAL subsequently became part of CSX, which sold the building to the town in 2003 for $1. This transfer of ownership led to a major rehabilitation project that aimed to return the depot to its 1948 appearance — when it had been significantly “modernized,” which meant crews replaced the flat roof with a hipped version, painted the exterior and renovated the waiting room, restrooms, platform and canopy. Today, the station is a perfect place to learn about the region’s historic, cultural, shopping and dining experiences — and snap a #SandhillsSelfie. 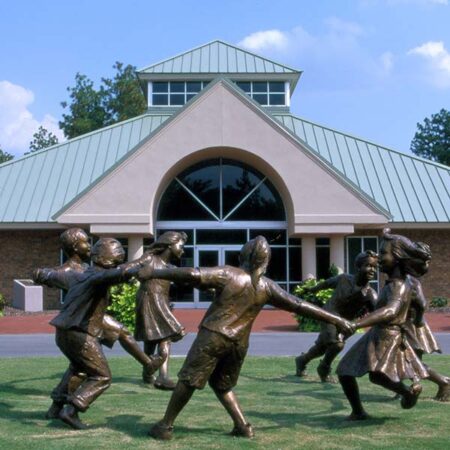 With its 10 major gardens majestically strewed over 32 amazing acres of designed space and natural areas, the Sandhills Horticultural Gardens — located in Pinehurst and maintained by the horticultural students at Sandhills Community College — has been described as a “mini-Biltmore Forest.” The richly varied offerings include the Ebersol Holly Collection (the East Coast’s largest), a specialized conifer garden, the Sir Walter Raleigh Garden — a 1-1/2-acre formal English garden — Hillside Garden, Azalea Garden, Japanese Garden and the Desmond Native Wetland Trail Garden. The immaculate and peaceful grounds are open year-round from dawn to sunset. Special note: There is always something interesting blooming, so true garden connoisseurs will want to visit during each of the four seasons. 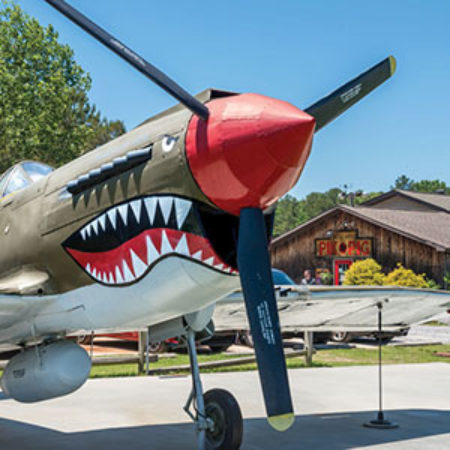 Cars and planes taxi up for cold beer and hickory-smoked BBQ at this home-style joint set just off the runway of the Gilliam-McConnell Airfield in the county seat town of Carthage. The Pik-n-Pig is a family-owned establishment, where the menu will have your mouth watering not only for barbecue, but also a slew of other Southern comfort food favorites. Three generations of love, sweat and tears, all contributing to create one delicious plate. Oh, and while you sit outside watching planes land and takeoff, don’t forget to snap a #SandhillsSelfie. 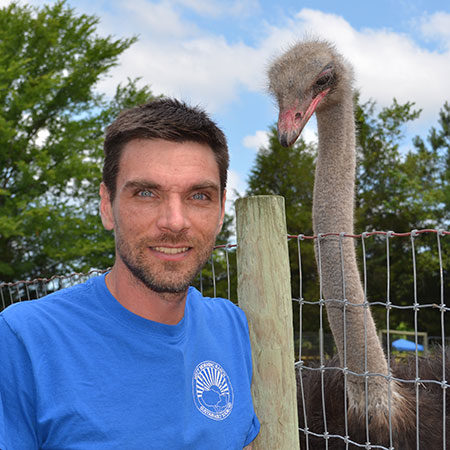 Misty Morning Ranch With an Ostrich

In 2016, on this beautiful, small (60-acre) ranch in Robbins, after departing the city life of Los Angeles, a husband-and-wife team started raising ostriches. With a passion and drive for sustainability, Ryan and Gaby Olufs researched farming alternatives. After visiting many different operations and learning as much about farming as any city folk can, they settled on raising ostriches. Thanks to North Carolina Goodness Grows, they were able to find Hilltop Ostrich Farm for mentoring and guidance. Today, the Olufs supply local restaurants such as Ashten’s, Chef Warren’s and the Sly Fox Pub with antibiotic free ostrich meat and jumbo-sized eggs, which are highly prized by pastry chefs for their rich yolks. And of course, with whom … or what … better than an ostrich to take a #SandhillsSelfie? 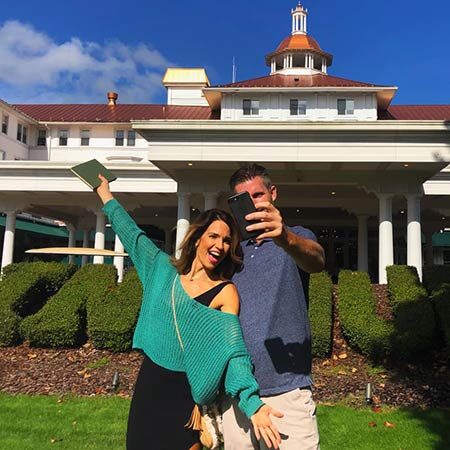 In Front of the Carolina Hotel

After Pinehurst’s first hotel, the Holly Inn, opened in 1895, more visitors began traveling to the area. As the Village continued to flourish, construction of the Carolina got underway in 1898. When the four-story Colonial Revival opened on Jan. 1, 1901, it was the largest frame hotel in North Carolina. The exterior was painted in Colonial colors, yellow with white trimmings and the building’s signature cupola was the talk of the town. They say you can feel the spirit of Pinehurst as soon as you turn onto Carolina Vista Drive, and we agree. Dubbed the “Queen of the South,” the majestic hotel, with its wide, sweeping verandas, makes you feel as though you’ve stepped back in time — to an era when the area’s grand hotels and resorts embodied Southern elegance. 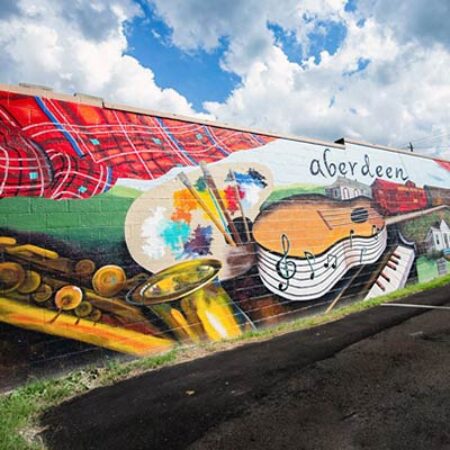 In Front of an Aberdeen Mural

Aberdeen is witnessing an art boom growing on the sides of formerly bare walls, where murals are being created along the downtown corridor. Aberdeen’s Scottish heritage and rich, vibrant history as a railroad hub is celebrated with a 65-foot mural behind the post office. In 2018, Aberdeen’s famed Coca-Cola mural was restored by Virginian muralist Jack Fralin as part of the company’s mission to restore “ghost” murals across the South. The Rooster’s Wife marks the side of one of Aberdeen’s intimate concert venues. Also, around the Sandhills, you can also find beautiful murals in Carthage, Robbins, Vass and Cameron. 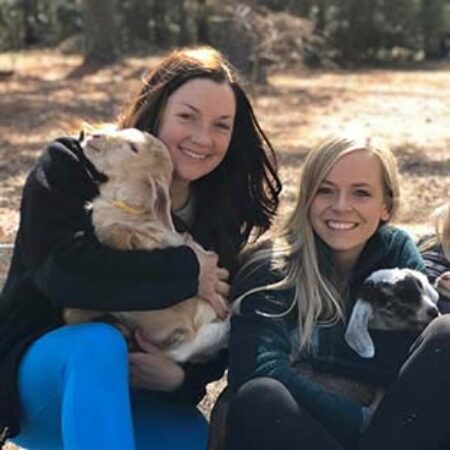 Sue Stovall admits that she and her late husband, Hunter, “had too much wine one night” in 2007, when they decided to buy livestock. The first goats, Thelma and Louise, were selected along with a third goat named Sarah and a llama they called Barry. The couple wanted to produce their own food for health and food security, but their endeavor continued to flourish. In 2016, they started producing cow’s milk cheese, with the purchase of local cow’s milk, while cheese curds became a popular choice for their loyal customers. The farm added aged cheese, farm events, cheese pairings with their local beverage producers … even goat yoga! Eventually, Paradox Farm gained Animal Welfare Status, the only in the county, and invited cuddlers out to the farm. Come take a #SandhillsSelfie with the goats! 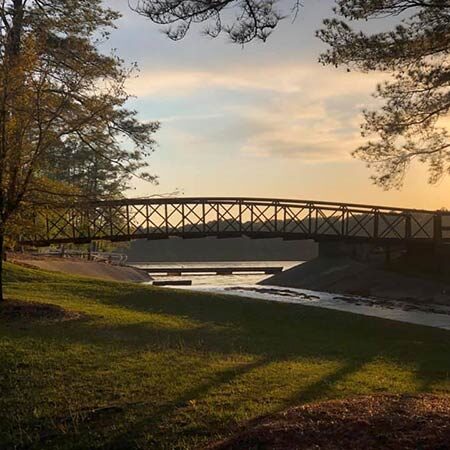 At Reservoir Park in Southern Pines, there is a 2.1-mile trail — sandy gravel most of the way — around the 95-acre lake that presents several stopping off points, with benches to rest, enjoy the view, watch the turtles … and snap a #SandhillsSelfie. Those interested in expanding their exercise can branch off on several different trails that will add distance and views of nature. Along with plenty of parking and public bathrooms, the scenic lake allows kayaking, fishing, boating (sail or electric motors only), paddle boarding and features a fun disc golf course. There are also two covered picnic shelters with grills and a number of picnic tables. 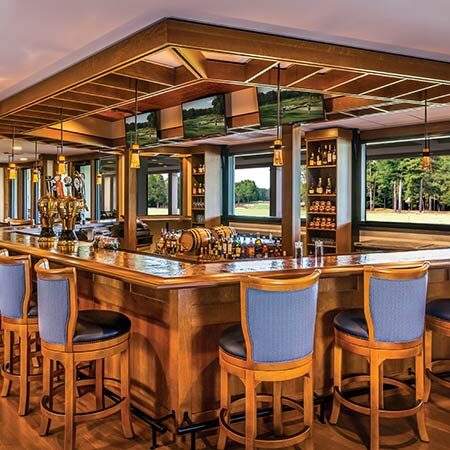 With Pinehurst No. 2 as a backdrop, relax after a day of golf — or tennis or croquet — with a cold beverage and a bite to eat on the veranda of The Deuce. Overlooking No. 2’s historic 18th hole, The Deuce has been called the best 19th hole in golf. Since 1898, Pinehurst has stood as the foundation of golf in America, and not surprisingly No. 2 once again secured the top spot as the best golf course in the state for 2021. Among the top 10, the Dogwood Course at The Country Club of North Carolina rose from fifth to third in the rankings. CCNC’s Dogwood and Cardinal courses will host the 2021 U.S. Junior Amateur this summer. They are among the 38 memorable courses, all within a 15-mile radius of Pinehurst.

Just another ideal way to enjoy the area … and snap a #SandhillsSelfie.