The World Golf Hall of Fame is Returning to Pinehurst

Cooperstown, New York, became the site of the Baseball Hall of Fame in 1936 when a local philanthropist named Stephen C. Clark thought it proper to pay homage to Abner Doubleday’s invention of the game in 1839 in Cooperstown and that it could be an economic engine to the town.

Canton, Ohio, was birthed as the home of the Pro Football Hall of Fame in 1963 because the town was where organizers created the American Professional Football Association (later to be renamed the National Football League), and it had great football heritage as Jim Thorpe, the first big-name athlete to play pro football, played for the Canton Bulldogs.

Springfield, Massachusetts, was the natural landing spot for the Basketball Hall of Fame in 1968 because it was at a local YMCA in 1891 that a physical education instructor at Springfield College named James Naismith had the idea for his students to throw a round ball into a basket tacked to a balcony 10 feet above the floor. 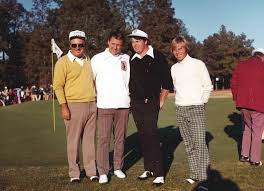 Golf? There was no golf hall of fame in the 1960s, save for one operated by the PGA of America dating to the 1940s that had a tight focus on male professionals. That was an oversight that Bill Maurer, the aggressive and bold-thinking president of the Diamondhead Corporation, set out to correct. Diamondhead had just completed the purchase of Pinehurst Resort & Country Club for $9.2 million in late 1970, and Maurer was brainstorming ways to bring more attention to the private club and public resort that admittedly had grown a bit stale and out of touch during the latter years of the founding Tufts family ownership. Two ideas Maurer had in early 1971 — bring professional tournament golf back to Pinehurst (the North & South Open was a significant event the first half of the 20th century but was discontinued in 1951) and create a golf hall of fame. Pinehurst deserved both, Maurer said.

“I was thinking to myself that it is unfortunate a tournament as great as the Masters is not in its 50th year at Pinehurst,” Maurer recalled. “But the people who had Pinehurst before us apparently didn’t think that way.”

Thus, Maurer conceived the World Open and invited the PGA Tour to come to Pinehurst in November 1973 for a novel 144-hole tournament with a half-million-dollar purse (a huge sum for the time).

He also decided to create a World Golf Hall of Fame and build a museum on land next to the fourth green and fifth tee of Pinehurst No. 2. This hall would span the globe and have a broader scope than the PGA’s shrine.

“We’re always talking about Pinehurst being the golf capital of the world,” Maurer said.

Maurer recruited a board of directors for the new Hall of Fame and hired golf writer and public relations consultant Bob Drum to move to Pinehurst and help run both the tournament and the Hall of Fame. They located the museum in a house in the village situated between Azalea Road and Village Green West (that house afterward became home to Bank of America, but is currently vacant). That venue was clearly identified as “temporary” on the signage in front until the permanent home could be completed. 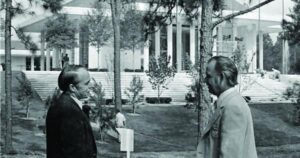 The 1974 World Open was contested Sept. 12-15 and coincided with the opening of the Hall of Fame, a $2.5 million edifice of expansive exhibit halls surrounded by water fountains. President Gerald Ford presided over the ceremony to induct the 13 charter members of the Hall of Fame. Eight of them were living and all showed up — Ben Hogan, Sam Snead, Byron Nelson, Arnold Palmer, Gary Player, Gene Sarazen, Patty Berg and Jack Nicklaus. Honored posthumously were Bobby Jones, Walter Hagen, Francis Ouimet, Harry Vardon and Babe Zaharias. Johnny Miller won the tournament in a playoff against Nicklaus, Frank Beard and Bob Murphy in a playoff.

The Hall of Fame was certainly a good idea, as the game of golf, for all of its rich history, had nothing along the lines of baseball’s Cooperstown or football’s Canton. Diamondhead funded the brain-child of Maurer, who was understandably sensitive to cynics who didn’t like the Hall of Fame funded by a company in the business of selling real estate and hotel rooms.

“Everybody else had a shot at doing it for 600 years and nobody did,” Maurer said. “If somebody else wants to build another one, fine. But I like the score I’m in the clubhouse with.”

Sadly for Maurer, Diamondhead and Pinehurst, soaring interest rates, gas shortages, political turmoil and a recession in the mid-to-late 1970s made for tough slogging. Diamondhead would lose Pinehurst to a consortium of banks in the early 1980s (when it was eventually bought in 1984 by its current owner, the Dedman family of Dallas) and the World Golf Hall of Fame struggled from the beginning as a business enterprise.

Pinehurst was the smallest town serving as home to a major sports hall of fame. It became apparent that golfers were more interesting in playing golf than reveling in its history when they visited. The Hall of Fame structure was overbuilt and expensive to heat and cool. And its No. 1 revenue-generating enterprise, the PGA Tour’s visit each fall, was beset by poor attendance and competition from college football and was discontinued after the 1982 Hall of Fame Championship.

The PGA of America rescued the Hall of Fame in 1983 and merged it with its own hall. Ultimately, the PGA couldn’t find the magic touch, and when the non-profit World Golf Foundation was formed in 1994, plans were made to build a new hall that opened in 1998 in St. Augustine, Florida. The World Golf Hall of Fame has been in St. Augustine ever since.

Attendance to the new iteration of the Hall of Fame peaked at 250,000 as it was located just off I-95 and was part of a multiple-purpose village that included two golf courses, a convention center and restaurants. But traffic had slowed to around 60,000 in 2021, and the WGF’s 25-year lease on its building was expiring at the end of 2023. Mike Whan, executive director of USGA, sat on the WGF board of directors and was privy to conversations about what to do with the Hall of Fame.

“A year ago, I knew that at the end of 2023, the Hall of Fame would need a new home,” Whan says. “I went to the board and said if you can give me eight months, I think I have the answer.”

That answer was revealed at a press conference at the Carolina Hotel in Pinehurst on July 20 – the World Golf Fame would move back to Pinehurst and be located on the second floor of the new Golf House Pinehurst facility the USGA is building on land adjacent to the Pinehurst Resort & Country Club golf clubhouse.

“The World Golf Hall of Fame started here 50 years ago, and like a lot of people from the East Coast, it spent a little time in Florida, got some time in the sun and enjoyed it, and now is returning home,” Whan said.

Jay Monahan, the PGA Tour commissioner who chairs the World Golf Foundation, said the move would “cement the long-term relevance and viability” of the Hall of Fame and expand on its partnership with USGA. 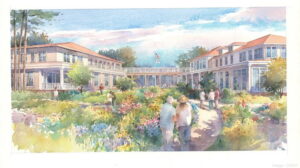 The obvious question for Whan in 2022 is what is different and what can make the relocated Hall of Fame a success when it failed the first time around? He’s quick with the answers.

“The original hall was not on the beaten path for golfers going to play Pinehurst No. 2 and all the other courses at resort,” he said. “If you’re at the Carolina Hotel or in the village and you’re going to play No. 2 or the Cradle, you’re going to be within walking distance of the World Golf Hall of Fame. That’s very different.

Finally, Whan circles back to what will make the Pinehurst hall stand apart from its brethren in Cooperstown and Canton. A football fan, for example, is not necessarily going to Canton, Ohio, unless they happen to be in the area.

“Everyone who plays golf will make the pilgrimage to Pinehurst at one point or another,” he said. “This is not a separate trip. Golfers are already coming. We need to make it convenient, sized appropriately and not worry about the bottom line.”