With Brewer On Board, Resort Nears Opening of Brewery 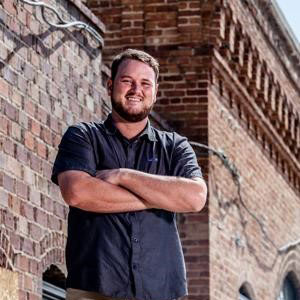 Would you camp outside in the winter cold for a beer? You might soon have that choice to consider, especially if you’re a fan of Eric Mitchell and Heist Brewery.

Mitchell, one of the nation’s hottest young brewers of cold beer, is now one of the newest employees of the Pinehurst Resort. The former head brewer of Heist in Charlotte has been tapped to be brewmaster of the resort’s new microbrewery opening this fall.

As the top guy at Heist, Mitchell has won recognition from the World Beer Cup and others. His IPA — called “Citraquench’l” — consistently ranks among the Top 10 IPAs in the U.S. and, last year, his fans braved the winter cold and camped out in line to be among the first to buy a new release of “Cataclysm,” Mitchell’s bourbon barrel-aged stout.

“I was hired to be myself and focus on the beers that I enjoy making. I enjoy nice, crisp hoppy lagers, New England-style IPAs, and stouts,” Mitchell said, anticipating he will commence brewing several weeks prior to the scheduled opening.

“Lagers take four to six weeks to produce, and we’re looking at a two- to three-week turnaround for most of the other brews I’ll be making,” he said. “I am a big proponent of organic growth. We will let the consumers decide what is going to be the brewery’s core beers.”

Mitchell said he’s looking forward to the opportunity to build a brand from scratch.

The Pinehurst Brewing Company will operate in the 7,000-square-foot former Pinehurst steam plant, which still reflects its first use. For decades, the steam plant powered the homes, hotels and cottages of Pinehurst until it was shuttered in the 1990s, falling into disrepair and, at one time, slated for demolition.

An observation platform overlooking the 10-barrel brewhouse will be a focal point of the taproom. Parts of the walls remain blackened from the decades it housed massive steam boilers. The new dining room will be complemented by a bar, a covered beer garden and an all-season patio.